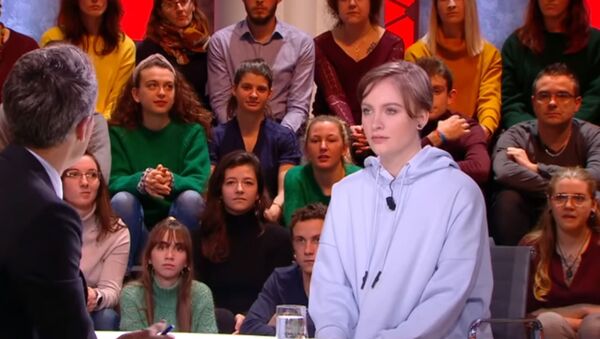 © Photo : YouTube screenshot
Subscribe
A 16-year-old French girl has earned fame and infamy after a live-stream on Instagram in which she called Islam a “religion of hatred”. The teen is staying home from school and has been put under police protection.

Several top-tier French politicians, including President Emmanuel Macron, have thrown their weight behind the girl who has faced a massive backlash from Muslims and the left after ranting about Islam online.

“The law is clear: we have the right to blasphemy, to criticise, to caricature religions,” he said in an interview to a local newspaper this week. “What is forbidden is to incite hatred and to attack dignity.

He was referring to the ‘Affaire Mila’, a controversy that started in mid-January when a 16-year-old girl – identified only as Mila by French police for security reasons – criticised Islam during an Instagram live-stream.

What did she say?

Mila, who lives in southeast France, said a Muslim guy was making advances to her during the stream, and she made it clear she was a lesbian and “blacks and Arabs” were not her type.

The girl claimed a “Muslim commentator” had called her a “dirty lesbian” and a “dirty whore” in response, and she immediately went into a rant about Islam.

“The Koran is a religion of hatred, there is only hatred in it. Islam is s**t, your religion is s**t,” she said, describing in obscene terms what she would do to Allah.

The video of her outburst has gone viral, prompting a severe backlash in the country that hosts the largest Muslim population in Europe. Mila reportedly began receiving death threats and was forced to move to a new school.

Police had looked into the online abuse she received and into whether she had incited religious hatred, a punishable offence in France. The hate speech investigation has since been dropped after it was ruled that she expressed a personal opinion and did not call for targeting individuals based on their beliefs. Interior Minister Castaner said last week that the teen and her family were put under police protection.

Mila appeared on a popular French talk show last week, where she refused to back down on her comments and insisted on her right to “blaspheme”.

What did other French politicians say?

Apart from Emmanuel Macron, Mila had the support of the right-wing National Rally leader Marine Le Pen, who said the girl had “more courage than the entire political class in power for the past 30 years".

Bruno Retailleau, the Senate leader of the centre-right Les Republicains, praised her for speaking out against what he called the “political Islam that is trampling our values”.

On the other side, Segolene Royal, a former ecology minister and candidate for president, said she stood by Mila’s right to criticise religion, but suggested that the teenager could have shown more “respect, manners and knowledge”.

Abdallah Zekri, a member of the French Council for the Muslim Faith who monitors Islamophobic sentiment in the country, argued that the ‘Affaire Mila’ is not about freedom of speech, but rather about her being “being vulgar and insulting”.

France’s justice minister, Nicole Belloubet, initially called Mila’s remarks “an infringement on freedom of conscience” but backtracked and apologised for being “inaccurate” and “clumsy” following a backlash.

“The Mila case has shed light on the issue of the right to blasphemy. That right exists. In our country, everyone is free to blaspheme. That is self-evident,” she stressed. “France is not a land of fatwas.”

000000
Popular comments
“The law is clear: we have the right to blasphemy, to criticise, to caricature religions,” Oh really? Try to blasphemy or criticise the jews or israel, and see what happens next!