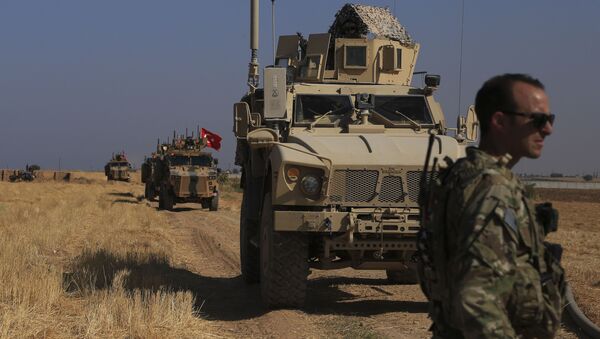 The US regards the Turco-Syrian conflict as a window of opportunity to close ranks with Ankara and project its force in the Balkan-Black Sea and Central Asian directions, says Mehmet Seyfettin Erol, the head of the Ankara Centre for Crisis and Policy Research.

As tensions between Ankara and the Syrian government forces began to escalate earlier in February, Washington embarked on a charm offensive with its NATO ally with US Special Representative for Syria Engagement James Jeffrey stepping up negotiations with the Turkish leadership.

Speaking to NTV on 12 February, Jeffrey voiced support for Turkey's "legitimate" interests and military presence in Syria and specifically in Idlib: "We have very close geostrategic objectives with Turkey in the two areas where you have forces committed right now in Libya and in Syria", the ambassador emphasised.

For quite a while Turkey and the US have been engaged in a war of words over Ankara's acquisition of the Russia-made S-400 air defence system as well as Washington's continuous propping up of the Kurdish People's Protection Units (YPG), which are considered as a terrorist group by the Turks.

Professor Mehmet Seyfettin Erol, the head of the Ankara Centre for Crisis and Policy Research (ANKASAM), believes that the US is seeking a way to mend fences with Turkey while seeing the recent conflict in the Idlib de-escalation zone as a "window of opportunity".

"The aggravating crisis in the Idlib zone is perceived by Washington as an opportunity to strengthen its position in the Balkan-Black Sea and Central Asian directions", the Turkish scholar observes. "That means that the US administration considers the Idlib crisis not only in relation to the situation in Syria, but as an opportunity to form a new geopolitical and strategic balance of forces in the region".

However, judging from its previous experience Ankara is aware of Washington's unreliability, he highlights, adding that therefore the Turkish leadership is seeking to pursue a more independent policy with regard to this matter and maintain interaction with Moscow.

"Ankara wants to adhere to a balanced, multi-vector foreign policy", he says. "In this sense, Turkey expects to further maintain a dialogue with Moscow, which, I think, the Kremlin is aware of".

He recollects that in the past Russia and Turkey successfully overcame tensions, such as the downing of the Russian Sukhoi Su-24 aircraft by a Turkish Air Force F-16 fighter jet in Syrian airspace on 24 November 2015.

According to Erol, it is important for Ankara and Moscow to stay on the right track avoiding rows which could affect the countries' foreign policy and security goals as well as joint energy projects.

"Drowning in a glass of water would be extremely impractical and would lead to very negative consequences for both sides in many areas", the scholar says.

He highlights that it is extremely important to develop a new roadmap during the upcoming negotiations between the Turkish delegation and their Russian counterparts in Moscow.

Tensions started simmering in Idlib as the Turkish Defence Ministry reported last week that eight Turkish troops and a civilian died in crossfire after Syrian troops fired on one of Turkey's observation posts in the province.

On Tuesday, Turkish President Erdogan vowed to retaliate saying that the Syrian government "would pay a heavy price" for its actions. It was reported earlier in the day that militants associated with the al-Nusra Front* downed a government helicopter in al-Nayrab, Idlib province.

As the clashes continued the Turkish military claimed that they had killed 101 Syrian government personnel in attacks on 115 Syrian Army targets in response to the Monday attack. Later the Turks reported that they had 'neutralized' 63 more.

In response to the announcements, the Russian Reconciliation Center for Syria dismissed them as "irresponsible" stressing that this course of action can only further intensify strife in the region. The Russian Ministry of Defence also refuted Ankara's claims about the deaths of dozens of Syrian soldiers in Idlib.

*Al-Nusra Front is a terrorist organisation banned in Russia and many other countries.