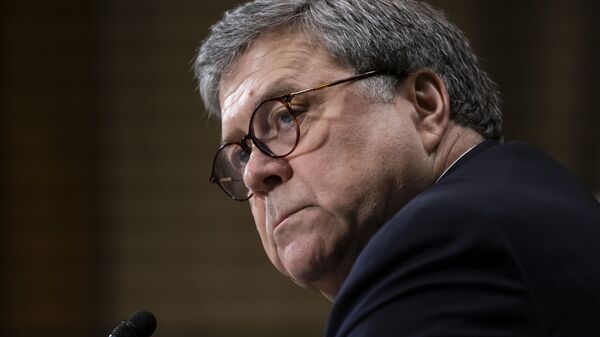 Ilya Tsukanov
All materialsWrite to the author
Earlier, the Democrats accused the attorney general of folding under pressure from the president and intervening in the sentencing of former Trump aide Roger Stone, who was convicted of obstruction of justice, lying to Congress and witness tampering during the Mueller investigation into alleged Trump-Russia collusion.

US Attorney General William Barr has accused President Trump of flooding the Justice Department with a “constant background commentary” in the form of tweets which he complained only serve to “undercut” him.

“I think it’s time to stop the tweeting about Department of Justice criminal cases,” Barr said, speaking to ABC News on Thursday, when asked whether the president had applied any pressure on him to intervene in the Stone case.

“I’m not going to be bullied or influenced by anybody…whether it’s Congress, a newspaper editorial board, or the president,” Barr insisted. “I’m going to do what I think is right. And you know…I cannot do my job here at the department with a constant background commentary that undercuts me,” he said.

Democratic House Speaker Nancy Pelosi called for a probe into President Trump’s alleged pressure on the DoJ to intervene in the sentencing of former Trump ally Roger Stone. Prosecutors in the case dramatically quit earlier this week after the DoJ challenged a recommended sentence of seven to nine years as “excessive and unwarranted.”

Barr denied that the DoJ’s actions had anything to do with the president, and said that he had determined that the recommended sentence was excessive. “The president has never asked me to do anything in a criminal case,” Barr said. He complained that Trump’s tweets made his job more difficult.

Earlier this week, Trump called the prosecutor-recommended sentence for Stone a “horrible and very unfair situation” and a “miscarriage of justice.” He was criticized by members of his own party, with Republican Senator and Senate Judiciary Committee chairman Lindsey Graham saying the president’s move to comment in an ongoing case was inappropriate.

However, Trump doubled down on his right to tweet on Friday, citing the Barr interview, claiming he had the legal right to ask the Justice Department to intervene, but had simply “so far chosen not to.”

“The President has never asked me to do anything in a criminal case.” A.G. Barr This doesn’t mean that I do not have, as President, the legal right to do so, I do, but I have so far chosen not to!

Roger Stone worked as Trump’s advisor during the 2016 presidential campaign. He was arrested in early 2019 in relation to FBI Special Counsel Robert Mueller’s probe into alleged Russian meddling in the 2016 race. Prosecutors accused Stone of lying in his 2017 testimony to the House Select Committee on Intelligence about alleged mediation between the Trump campaign and WikiLeaks, which had released hacked Democratic National Committee emails which proved embarrassing to Hillary Clinton, Trump’s Democratic rival. In late 2019, Stone was found guilty on seven charges, including giving false testimony to Congress, obstruction of justice and witness tampering.