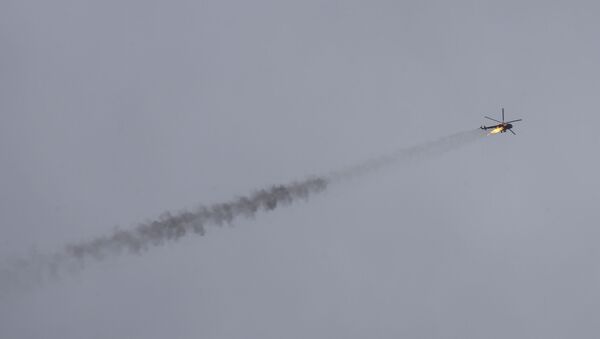 Militants shot down a Syrian army helicopter in Aleppo province, according to the Anadolu news agency.

The helicopter was making a sortie when it was shot down over Al Atarib in the province of Aleppo.

According to Sputnik correspondent, the helicopter was shot down by Jabhat al-Nusra* terrorists.

The Sputnik correspondent in Aleppo reports that the downed helicopter was flying combat sorties against terrorist strongholds in Urem Al-Kubra.

A military source has confirmed the death of the helicopter crew.

At the moment, Urem Al-Kubra is one of the most fortified points held by the al-Nusra terrorists in southwestern Aleppo province. The downed helicopter was providing air support to the Syrian infantry.

It is the second time in three days that the Syrian Armed Forces have lost a helicopter in northwestern Syria.

On Tuesday, a Syrian Army helicopter was shot down in the northwest of the country by Turkey-backed rebels.

Tensions in northern Syria began to escalate earlier this month after eight Turkish nationals were killed in shelling conducted by Syrian forces on one of Turkey's observation posts in Idlib. Turkish troops responded with an air strike and claimed that they killed 76 Syrian servicemen.

Idlib is one of four de-escalation zones created in Syria through the joint efforts of Russia, Iran and Turkey in 2017. The region is believed to contain tens of thousands of terrorist militants, as well as hundreds of thousands of civilians. Late year, the Syrian Army began an operation in the region after repeated attacks on Syrian military positions by militants claimed the lives of dozens of servicemen.