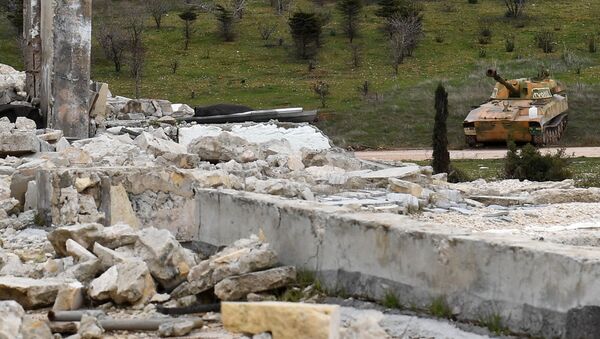 Tensions in Syria began to escalate earlier this month after eight Turkish nationals were killed in shelling by Syrian forces on Turkey's observation posts in Idlib. On Friday, a Syrian army helicopter was downed over Al Atarib in the province of Aleppo, the second helicopter that the Syrians have lost in the past week.

On Friday, the Russian military refuted Turkish claims about the deaths of dozens of Syrian servicemen in Idlib, adding that such statements could only lead to an escalation of the situation.

Tensions in Idlib, one of four de-escalation zones in Syria, intensified last week after the Turkish Defence Ministry said that eight Turkish military personnel and a civilian died in shelling by Syrian troops on one of Turkey's observation posts in the province.

As a result, Turkish President Recep Tayyip Erdogan pledged to take retaliatory measures if Syria's armed forces failed to stop their operations in the zone and withdraw from the areas close to Turkey's observation posts by the end of February.

CAIRO (Sputnik) - Syrian government forces on Friday took control of an area in the country’s northwest that lies only four miles from the Bab al-Hawa border crossing to Turkey, media said.

An advance party knocked out militants from the former headquarters of the Syrian army’s 46th division in the volatile Idlib province, the pro-Syrian government newspaper Al-Watan reported.

The troops are reportedly less than two miles away from the strategic city of Al Atarib on the Bab al-Hawa road and control the nearby villages of Urem Kubra and Urem Sugra.