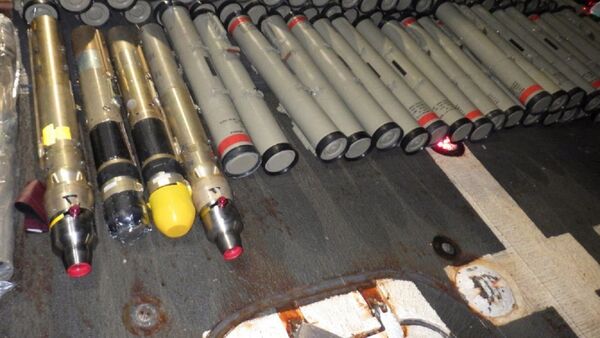 US Central Command (CENTCOM) announced Thursday afternoon that the USS Normandy (CG60) boarded a dhow in the Arabian Sea on Sunday and seized a "large cache" of Iranian-made weapons while conducting "maritime security operations."

"The weapons seized include 150 'Dehlavieh' anti-tank guided missiles (ATGM), which are Iranian-manufactured copies of Russian Kornet ATGMs," read the February 13 CENTCOM release. "Other weapons components seized aboard the dhow were of Iranian design and manufacture and included three Iranian surface-to-air missiles, Iranian thermal imaging weapon scopes, and Iranian components for unmanned aerial and surface vessels, as well as other munitions and advanced weapons parts."

Video footage released by CENTCOM Public Affairs shows US Navy personnel boarding the vessel during the February 9 operation in the Arabian Sea.

Several images of the weapons obtained from the dhow were released by the US military as well.

The news release noted that the cache of "advanced weapons and weapon components" retrieved from the vessel are "identical" to those seized by the USS Forrest Sherman from a boat in the Arabian Sea on November 25, 2019.

"Those weapons were determined to be of Iranian origin and assessed to be destined for the Houthis in Yemen, which would be in violation of a UN Security Council Resolution that prohibits the direct or indirect supply, sale, or transfer of weapons to the Houthis," CENTCOM alleged.

The US revealed images of the weapons obtained in the November 25 raid following an early December 2019 press conference.