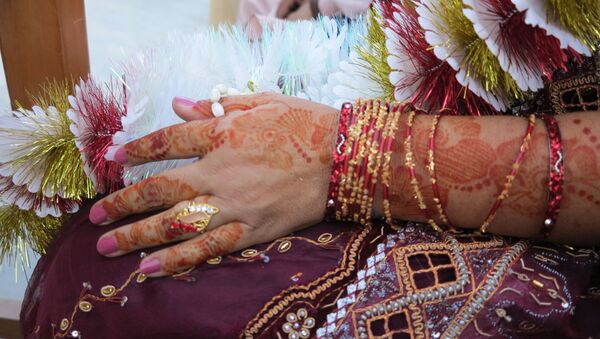 CC0 / /
Subscribe
New Delhi (Sputnik): Polygamy is legally permissible in Pakistan, where Muslim men are allowed to have four wives simultaneously. However, the tradition isn't popular among today's married women, especially when they face competition.

A Pakistani man was rescued by police after his first wife gate-crashed his third wedding, where she beat him and tore up his clothes in front of the guests.

Madiha, the first wife of the groom identified as Asif Rafiq from Karachi, raided the venue together with her relatives as she had objections to his decision to tie the knot with a third wife. Rafiq had sought his second and third wife despite her disapproval, the media reported.

Two videos from the wedding were making the rounds on social media. While one video shows the dishevelled groom being escorted out of the reception by police officials, the second video shows Madiha talking to the well-dressed relatives and guests, who were there to attend the ceremony.

In the second video, burqa-clad Madiha reveals further details about her 2014 marriage to Rafiq.

Madiha told the guests that the young boy who had accompanied her to the ceremony was her son, and that Rafiq was her father. The video also showed her pointing to her mother-in-law and sister-in-law, who were present at the venue.

Later, she also mentioned that Rafiq’s second wife, a Karachi-based Jinnah University employee, had also been informed about her husband’s latest marriage.

According to media reports, Rafiq had claimed that he had ended his marriage to Madiha while insisting that he was, indeed allowed to have four wives at one time.

For now, the authorities have suggested that the husband and wife approach a civil court for legal proceedings.