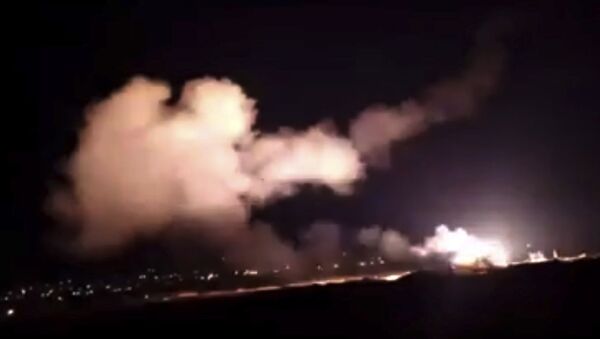 Users sharing videos online allege that multiple airstrikes have been reported as the Syrian Air Defense Force systems respond to the attacks. Citing Syrian state TV, Reuters reported that Syrian air defenses have "downed several hostile targets in Damascus air space." It's unclear if the attack led to any casualties or damage.

​According to the United Arab Emirates-based Al-Hadath news agency, the attack may have been carried out from Lebanese airspace.The Syrian Army intercepted and downed missiles coming from the Israeli-occupied Golan Heights before they reached their targets, according to a report by Reuters.

Unconfirmed reports suggest that projectiles were intended to strike an ammunition depot station near the Damascus International Airport.

​​On Friday, the Russian Defense Ministry said that the Israeli airstrikes on Damascus suburbs on February 6 threatened a passenger plane with 172 people on board, prompting it to divert to Russia’s Hmeymim airbase in Syria, Sputnik previously reported.

​In January, Israeli planes also carried out an attack on the T-4 airbase in Syria's Homs Governorate.

Syria has been embroiled in a devastating civil war since 2011, with government forces fighting against numerous opposition groups as well as militant and terrorist organizations, Sputnik reported.