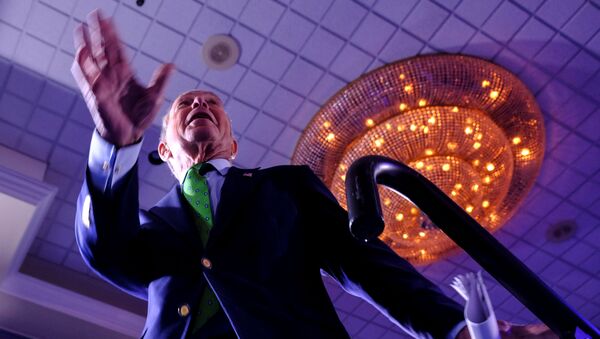 Mike Bloomberg has launched a massive (social) media blitz as part of his presidential bid, contracting influencers to post his self-crafted granddad jokes.

His team has reached out to multiple Instagram accounts, from smaller ones with just over 2,000 followers to entire meme aggregators with the audience numbering in the millions.

Those micro- and macroinfluencers have recently started uploading screenshots of fake direct messages from Bloomberg himself, in which the Democratic candidate appears to purposefully come off as a weird, out-of-touch billionaire trying to engage with the younger audience.

The biggest account to have shared a Bloomberg-sponsored post is fuckjerry, one of Instagram’s largest joke aggregators, with close to 15 million followers.

“Hello Jerry. My granddaughter showed me this account. Your memes are very humorous,” Bloomberg writes in a screenshot of a chat posted by fuckjerry. “Can you post a meme that lets everyone know I’m the cool candidate?”

Fuckjerry is run by the advertising company Jerry Media, which has a network of similar humorous accounts. Jerry Media’s CEO is internet entrepreneur Mick Purzycki; according to The New York Times, he also is a chief strategist at Meme 2020, a new company working with Bloomberg’s campaign.

All of the posts have a disclaimer that they are ads paid for by Bloomberg. They have reached a total of more than 60 million followers – roughly eight times the audience that watched the Democratic debate last week.

Last week, The Daily Beast reported that the Bloomberg campaign pays a relatively low fixed fee of $150 to influencers with 1,000 to 100,000 followers – compared with his estimated net worth of $61.8 billion. There have been no details about pitching posts to the bigger accounts.

Sabrina Singh, the national spokesperson for the Bloomberg campaign, confirmed his meme offensive in a statement, saying his team sees the strategy as an “effective component to reach people where they are and compete with President Trump’s powerful digital operation.”

Some critics, including in the Democratic Party, have accused Bloomberg of effectively trying to buy the election. Sanders said of this gap: “He has every right in the world to run for office…But he doesn’t have the right to buy an election. This is exactly the problem with American politics.”

Bloomberg’s publicity effort includes a wave of weird, if not downright surreal, posts on social media.

Some of the most notorious ones include a photo of his face superimposed onto a literal meatball, a doctored picture of Gerald Ford eating a calzone, and an animated dancing gingerbread man repeating “liar” to a clip of Donald Trump’s speech.

Test your political knowledge:
SPOT THE MEATBALL THAT LOOKS LIKE MIKE. pic.twitter.com/CkzdgwpzdI

Trump was in rare form during his post-acquittal speech. pic.twitter.com/jq8NTTn5yd

​Those absurd posts have received a somewhat lukewarm feedback, with many people calling them cringe-worthy (which probably was the goal) and pointing out (which it probably wasn’t) that Bloomberg himself wasn’t in on the joke, unlike the campaign workers in charge of his social media outreach.

“I don’t know, I like meatballs,” Bloomberg said of his most viral tweet. “It was young people that run the social media part of the campaign having some fun.” Bloomberg will turn 78 on 14 February.