'It Was a War Crime': Eyewitness to the 1945 Bombing of Dresden 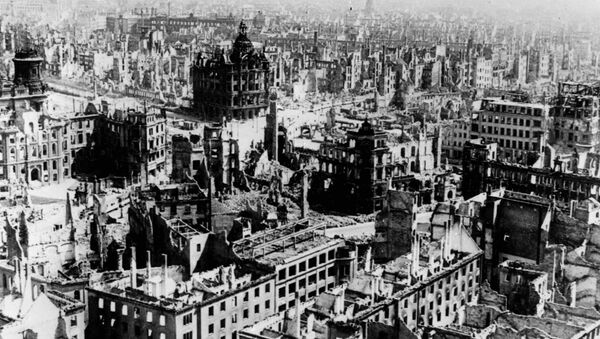 Thursday, 13 February, marks 75 years since the start of the US-British bombing of Dresden, which took place from 13 to 15 February 1945. According to official figures, the bombing resulted in 25 thousand civilian deaths. Christoph Adam is one of those who witnessed the bombings.

90-year-old Christoph Adam says that the Dresden bombing raids were considered a real war crime, rather than “retribution” for Nazi Germany’s war crimes. To this day, he demands disarmament from the country’s current leadership.

In 1945, Christoph Adam was 14 years old. Together with his parents and a three-year-old brother, he lived in Dresden, in the district of Johannstadt at 25 Dürerplatz Square. On the night of 14 February, the British and US Air Forces started bombing the city. On 15 February, Christoph witnessed the last wave of these bombings.

Christoph Adam told Sputnik about what he had to go through during those days, as well as his assessment of those events.

As usual, in the morning I went to school, to Kreuzgymnasium, and then I met refugees at the Central Station, because I was a member of the organisation involved in their care. More and more trains with refugees from the east, usually from East Prussia and Silesia, were arriving at the station. There was a headquarters at the station, which gave us the addresses to resettle the refugees – those addresses were in various parts of the city; but usually refugees were housed with their friends and relatives. Usually, we got there by tram. As a schoolboy, I had a corresponding certificate. The last refugees I managed to accommodate went to the Klein-Schachwitz district on the banks of the Elbe.

Then, like every year, at home, we celebrated Fasching (a carnival before the Great Lent, analogous to Mardi Gras); we dressed up as hunters and Indians. Our house at Dürerplatz Square was decorated with coloured paper lanterns and ribbons. In the evening we went to bed; and in the middle of the night a siren started howling suddenly. We rushed to the basement. In Dresden, there were no bomb shelters or anything like that, and so we were hiding in basements. “We” meaning the residents of the apartment building, about 60 people.

A terrible noise was heard everywhere: when the bombers were flying over our district, there was the unbearable, deafening roar of a huge number of engines – we had never heard such a noise before. At that same time, we heard the whistle of falling high-explosive mines and other bombs, as well as murderously loud explosions. We smelled smoke; the wall of the house next door partially collapsed. A few years before, houses standing next to each other had been connected by masonry made of ordinary bricks. About 40 more people ran and crawled towards us. The walls were trembling, plaster was falling from the ceiling, screams and groans were heard everywhere.

We had to quickly get out of the basement and run to Dürerplatz, which was about twice as large as the Old Market Square. There we saw that houses were burning everywhere. I still remember the view: houses on fire, from top to bottom. Firefighters had already arrived there, but they couldn’t do anything, despite the fact that they had enough water thanks to the Russian war prisoners who had built the fire pool. Firefighters simply had no chance to put out the fire. We tried to escape from the square, but the streets were already partially blocked by the rubble of the crumbling houses.

We wanted to get to Grosser Garten and ran to the former Fürstenstrasse. At Fürstenplatz (now Fetscherplatz) we were caught in a real firestorm. It was so powerful that it knocked the whole our family off our feet. We had been lying on the street for a long time. I think the wind power was about 150 km/h. One of the side streets was a sort of “chimney,” forming a powerful traction in the direction of the city centre; we simply couldn’t keep our footing. As one friend later told me, in the city centre the draft was 200 km/h – people literally flew through the air, horizontally: he saw some woman with a stroller and some wounded man with crutches literally pulled into the fire.

Pillars of flame were reaching 500 metres in height – Dresden had been burning for several days in a row. Then we helped each other up and, supporting each other, ran on. We managed to run about 300 metres, and then the second attack began. It was already 14 February. We met that attack right on the street. The sirens no longer howled – the bombs were falling, and there was terrible noise everywhere. We lay down under a tree on the edge of some street, and suddenly an incendiary bomb fell next to me – maybe half a metre or a metre away. My father managed to cover us all with a wet towel (which he'd grabbed from the house). Holes formed in the blanket – probably the size of a fist – sometimes the fire burned the skin. Completely defenseless, we had lied on the street for 45 minutes. Every five to ten metres, something was burning. The whole street turned into one big torch.

As my friends later told me, in Johannstadt, the houses extinguished after the first bombing were deliberately bombarded again. As a result, there were only ruins. During the three waves of bombing, about a million bombs, mostly incendiary, fell on the city. Fortunately, we all survived and managed to reach Grosser Garten. There I lay down under a tree and woke up only the next day. From Grosser Garten we got to our relatives’ place, to the house in which I still live. There, in the basement, we survived the third wave of the bombing. My parents decided to leave the city with me and my three-year-old brother. We were picked up by a convoy of military trucks transporting refugees, and we set off towards Freital. In the end, we settled in a refugee hostel in Altenberg, where we stayed until the end of the war.

Machine-gun Fire at the Fleeing

I heard that after the bombing – of course, not the first one when people still were in the basements, but after the second one when some dared to go out into the street – they targeted their machine guns at people, it was a real hunt. I myself didn't see this.

The (German) General in charge of Dresden also talked about this. The second bombing caught him under the Marienbrücke Bridge, and, according to him, in the lowlands on the banks of the Elbe, they fired machine guns at the fleeing residents of Dresden. Several friends told me the same thing. They still live there. I asked them to write about it, but they don’t want to.

“... you will also end up in graves” – the number of victims

A friend of mine published the number of dead Dresden residents: he managed to count 35,500 victims – after the war he devoted his whole life to finding information. For a long time he has kept a leaflet dropped by the Western Allies troops, saying: “Just you wait, you will also end up in graves” (“Wartet nur, ihr Zwerge, ihr kommt auch noch in die Särge”). I myself haven’t seen such leaflets, but my friends have them. It was dangerous to keep such leaflets during times of war. Compared with the total number of war victims, it would seem that it is not that important, when 25 or 30 thousand people died at that time; but even one victim is already a lot! Talking about whether even 500 thousand people or maybe less died during the bombing won’t help us. We should say: “we want to act differently; we want peace in the future”. I once calculated that such an attack, together with the preparation for it, cost a billion – and it provided for the senseless extermination of people.

Our ancestors started the war, but from a historical point of view, this particular attack was unnecessary. At that time, the Russians approaching Dresden were closer than 100 kilometres away. The Soviet troops were already fighting near Görlitz. We, Dresden residents, during the 1945 Fasching quite unexpectedly witnessed an infernal bombing against defenceless and unarmed civilians. It was strategically planned, but, from a purely military point of view, a pointless inferno: the attack was not launched against military targets, moreover, it was well known that there were no bomb shelters in Dresden – we only had basements. The Allied Air Force Command was aware of that. And when, after the first wave of bombing was followed by a second and a third one, when people were on the streets or in parks – in my opinion, this was a crime.

Some military commander’s crazy vengeance strategy became the reason for the systematic hellish bombing of refugees, overcrowding Dresden streets, which resulted in thousands of civilians deaths: this was an action of retaliation. Churchill hated Germany because the Germans had bombed Coventry and had been the first to fire rockets at England. At that time no one thought about it, including the one who designed them (Werner von Braun), the one who later developed space rockets.

Many years later, I walked along the streets of our already-restored city with one English bomber pilot; and I had the feeling that he felt remorse for the war that they waged for revenge. We shook hands in friendship.

No retribution for recklessness

I don’t want to think that what happened in Dresden was “retribution”. I can’t take it that way. This is madness. We should take care of the future. My wishes are directed to the future. We have to do something, not for the reason, and purely symbolically, that Europe has already lived in peace for the 75 years since the Second World War.

It was a war crime – and there were many of them. I cannot blame the British for this, because the Germans also fired rockets at London – and that was crazy too. We have to draw a line under all this. And everyone should work on it – both old and young.

We should stop counting who fired at whom, and forgive each other. Young people should help the elderly overcome hostility between nations. So that what I and other Dresden residents had to go through doesn’t happen again.

We want peace – disarmament in Germany

When I see our government plan to increase military spending, and I hear Mr. Trump demanding that our country purchase more weapons, I think that we must do exactly the opposite! We don’t want the past to repeat itself; and we don’t try to quarrel with someone. We want peace! I want our government, our country – Germany – to start disarming, refuse to export arms and “rebuild” the army along the lines of peace-keeping, because Germany participated in the First World War and committed serious crimes during the Second World War – in Poland and Russia. The current arms trade around the world contributes to the same crazy scenarios.

At the same time, there are a lot of different issues in the world: people are suffering from hunger, the climate is changing… As for the future, I would like for the money that is now being madly destroyed to be used for peaceful purposes. Because we, the older generation, will soon lose our voice.