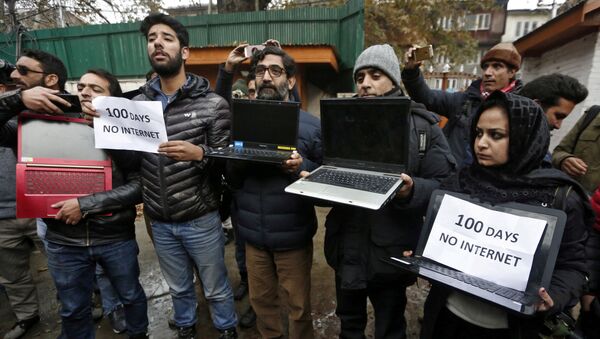 © REUTERS / Danish Ismail
Subscribe
New Delhi (Sputnik): One of the prominent Separatist leaders of Kashmir, Sayed Ali Shah Geelani, has been ill for a long time, and was reported to be in a critical condition. The region's authorities suspended internet access in the valley, fuelling rumours of his death.

On Thursday, internet services were suspended and security forces put on high alert in the Kashmir valley as rumours about the death of a prominent separatist leader, Sayed Ali Shah Geelani, spread across the region.

Government sources, however, said the 90-year-old Geelani’s health condition is critical but stable.

All Parties Hurriyat (Freedom) Conference – a conglomeration of over a dozen separatist outfits in Kashmir, issued an urgent statement, asking all Muslim clerics and ordinary citizens to offer prayers for the recovery of Geelani. It also asked people to gather at Eidgah, an open-air enclosure reserved for offering prayers in Srinagar.

The Hurriyat Conference recently revealed that Geelani had expressed his wish to be buried at the Mazar-e-Shuhada, Eidgah in Srinagar.

Geelani had been suffering from a chest infection and was not responding to ongoing treatment.

"There are rumours in the Valley about Geelani's health condition. Until late at night, nothing adverse has been reported. We are taking stock of the situation," Outlook news site quoted a senior officer of the Srinagar police as saying.

In the first week of January 2020, security was tightened in Kashmir amid rumours of Gelaani’s death. His health, funeral and the aftereffects of his death have remained a point of concern for the Kashmir administration as mass of people would join the funeral and could trigger anti-Indian sentiments.