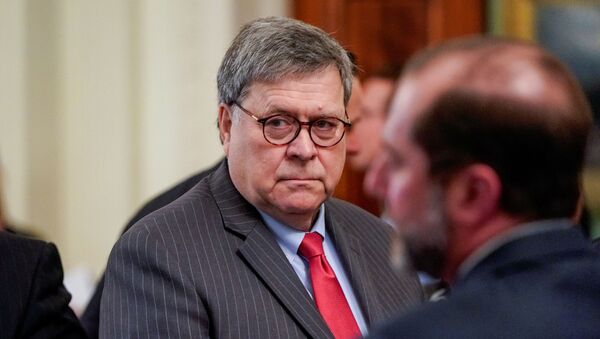 © REUTERS / Joshua Roberts
Subscribe
As Democrats seek Attorney General Bill Barr’s removal following an about-face on Trump ally Roger Stone’s sentencing recommendation, one expert tells Sputnik the pushback may have more to do with the pending release of the Justice Department’s so-called “anti-Mueller report” than anything else.

Daniel Lazare, a journalist and author of “The Frozen Republic,” “The Velvet Coup” and “America's Undeclared War,” joined Radio Sputnik’s Loud and Clear on Wednesday to provide his thoughts on why the Democrats’ reaction to the DoJ’s Stone sentencing recommendation memo is about more than just the prison time awaiting a self-proclaimed “dirty trickster.”

Lazare told hosts Brian Becker and John Kiriakou that he believes Barr is “at odds with the ranks beneath him,” because “the bulk of the DoJ bureaucracy” is still in a “pro-Mueller,” Russiagate mindset.

“I think the DoJ and the local US attorneys went wild in this case and carried it way too far,” he argued, speaking of what he called a “draconian sentence” for Stone. At the same time, Lazare expressed that he does believe that Stone is a “dirty trickster” who needed to be “slapped down,” but not given a possible sentence of seven to nine years behind bars.

Being that Russiagate and the investigation by special counsel Robert Mueller failed to result in US President Donald Trump’s removal from office, “obviously a house cleaning is taking place in the DoJ,” Lazare contended.

All four prosecutors withdrew from Stone’s case shortly after DoJ officials told the media they were “shocked” by the sentencing recommendation prosecutors handed down.

Jonathan Kravis, who served as an assistant US attorney, and Special Assistant US Attorney Aaron S.J. Zelinsky took their withdrawals a step further: Kravis declared in a Tuesday court filing that he has withdrawn from his position at the DoJ and “therefore no longer represents the government in this matter,” and Zelinsky said in his withdrawal notice that he had “resigned effective immediately” from his role in the Washington, DC, US Attorney’s Office.

A supplemental and amended sentencing memorandum was later released by the DoJ on Tuesday, noting that the prior filing “does not accurately reflect the Department of Justice's position on what would be a reasonable sentence in this matter.”

Barr and the DoJ’s unusual intervention in the matter and the prosecutors’ resignations sparked outrage from a number of individuals, such as House Speaker Nancy Pelosi (D-CA), who called on the DoJ to be investigated. Senator and Democratic presidential candidate Elizabeth Warren (D-MA) argued that the attorney general should resign or face impeachment from Congress.

Congress must act immediately to rein in our lawless Attorney General. Barr should resign or face impeachment. And Congress should use spending power to defund the AG’s authority to interfere with anything that affects Trump, his friends, or his elections.

“The Durham investigation, which is a criminal investigation, will be, essentially, the anti-Mueller report,” Lazare argued. “When someone like Elizabeth Warren calls for Bill Barr to resign, what she’s really saying is, ‘Stop Durham from issuing that report. Let’s protect the anti-Trump factions in the DoJ, because John Durham, potentially, could blow them out of the water.”

US Attorney John Durham was assigned last spring by Barr to explore the origins of the Russiagate probe, especially why the FBI had spied on Trump election campaign officials if, as the Mueller report concluded, there was no proof of their collusion with the Russian government.

While it's unclear when information pertaining to Durham’s investigation will drop, House Minority Whip Steve Scalise (R-LA) recently argued that the “dirty cops” undermining Trump’s agenda may soon be dealt with.

“I have seen some classified information I can't go into — but, I can say this: Hopefully, Durham names names. I think the attorney general is waiting to see what comes out of that. And then, hopefully, they go after those people and put them in jail,” he told Fox News’ Sean Hannity on February 7, as reported by the Washington Examiner.

000000
Popular comments
Investigations and impeachment are all the Democrats offer. The country has some serious problems, but the Democrats are obsessed with infighting. Congress's internal power battles have become a spectacle for the masses to distract their attention from the miserable state of the nation.
Gio Con
13 February 2020, 18:59 GMT1
000000
Newsfeed
0
New firstOld first
loader
LIVE
Заголовок открываемого материала
Access to the chat has been blocked for violating the rules . You will be able to participate again through:∞. If you do not agree with the blocking, please use the feedback form
The discussion is closed. You can participate in the discussion within 24 hours after the publication of the article.
To participate in the discussion
log in or register
loader
Chats
Заголовок открываемого материала
Worldwide
InternationalEnglishEnglishMundoEspañolSpanish
Europe
DeutschlandDeutschGermanFranceFrançaisFrenchΕλλάδαΕλληνικάGreekItaliaItalianoItalianČeská republikaČeštinaCzechPolskaPolskiPolishСрбиjаСрпскиSerbianLatvijaLatviešuLatvianLietuvaLietuviųLithuanianMoldovaMoldoveneascăMoldavianБеларусьБеларускiBelarusian
Transcaucasia
ԱրմենիաՀայերենArmenianАҧсныАҧсышәалаAbkhazХуссар ИрыстонИронауОssetianსაქართველოქართულიGeorgianAzərbaycanАzərbaycancaAzerbaijani
Middle East
Sputnik عربيArabicArabicTürkiyeTürkçeTurkishSputnik ایرانPersianPersianSputnik افغانستانDariDari
Central Asia
ҚазақстанҚазақ тіліKazakhКыргызстанКыргызчаKyrgyzOʻzbekistonЎзбекчаUzbekТоҷикистонТоҷикӣTajik
East & Southeast Asia
Việt NamTiếng ViệtVietnamese日本日本語Japanese俄罗斯卫星通讯社中文（简体）Chinese (simplified)俄罗斯卫星通讯社中文（繁体）Chinese (traditional)
South America
BrasilPortuguêsPortuguese
NewsfeedBreaking
13:45 GMT'Three Civilians Killed in US Airdrop Operation' in Syria's Deir ez-Zor
13:21 GMTIraq Arrests Activists, Ministry Employee for Calls to Normalise Ties With Israel
13:20 GMTMali to Explore New Security Partnerships As France Ends Sahel Operation
13:18 GMTMerkel's Potential Successor Laschet Reveals His Vote Preference in Election Blunder
13:11 GMTWomen to Dominate Iceland's Parliament for First Time Ever, Reports Suggest
13:09 GMTBlast Kills Taliban Intelligence Officer in Eastern Afghanistan, Source Says
13:00 GMTGermans Head to Polls to Choose New Bundestag
12:51 GMTDozens of New Yorkers Stage Anti-Vaccine Protest at a Food Court Chanting F**k Joe Biden
12:41 GMTFour Inmates Dead, One Injured in Attempted Jailbreak in Philippines, Reports Suggest
12:40 GMTVirginia Giuffre to Reportedly Hand Prince Andrew Secret Doc Able to Defeat Her Lawsuit
12:37 GMTRussia Scrambles Three Su-35 Jets to Escort US B-52 Bomber Approaching Border in Pacific Ocean
12:32 GMTCyclone Gulab Likely to Make Landfall in India on Sunday Evening
12:21 GMTUN Chief Warns 'Humanity Unacceptably Close to Nuclear Annihilation'
12:09 GMTKremlin Says It Hopes for Consistency on Minsk Agreements From Germany After Merkel Leaves
12:02 GMTRussian Presidential Spokesman Says Gazprom Fulfilling All Obligations
11:54 GMTLabour Leader Says It's 'Not Right' to Say Only Women Have a Cervix
11:43 GMT'F**k Them': Carlson Responds to Yet Another Call to Fire Him Over 'Great Replacement' Theory
11:42 GMT'Piece of Scum': UK Labour Deputy Leader Lashes Out at Tories
11:14 GMTUK Transport Minister Calls on Britons to Behave Normally, Says There is No Shortage of Fuel
11:12 GMTHamas Has No Place in Sudan But Will It Give Up on Former 'Base'?