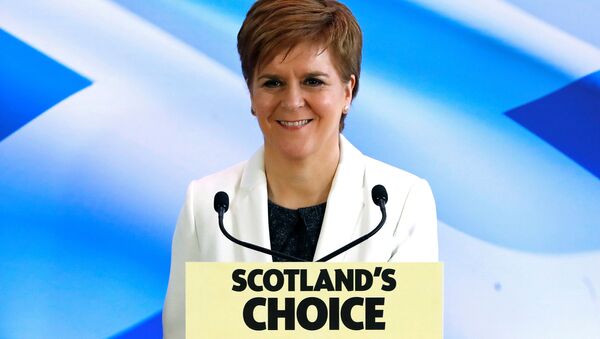 Tommy Sheridan
All materials
Scores of Twitter Followers and Facebook Friends have messaged me over the last twelve days seeking my response to the much trailed keynote speech delivered by First Minister Nicola Sturgeon on Friday 31st January in Edinburgh concerning the next step in the Scottish independence campaign.

After securing a clear and unequivocal mandate for #IndyRef2 at the May 2016 Scottish general election and winning the support of the Scottish Parliament for such a new poll in a subsequent debate the First Minister has had a democratic mandate from the Scottish people to name the date for #IndyRef2 for almost four years. That mandate was reinforced in 2017, 2019 and a in further Scottish Parliament vote only weeks ago. I anticipated positive news on Friday 31st January.

Yet, I was to be sorely disappointed by the content of the First Minister’s speech. I was actually deflated, upset and even somewhat embarrassed. For months I had drawn on the public statements of the First Minister to inform me as I spoke at rally after rally, public meeting after public meeting calling for maximum unity within the independence movement and maximum votes for the SNP at the December General Election, because the SNP Government were committed to holding #IndyRef2 in 2020. My preference was for #IndyRef2 to be called in the course of 2019 as the British Establishment was in chaos and mired in division over Brexit. Taking on the might of the big and brutal British union while they were diverted, divided and therefore weakened over their relationship with the EU was a tactically sound idea as far as I was concerned.

Too Much Time Spent On Brexit, Not Enough on Independence

Apparently wiser souls within the SNP hierarchy prevailed and instead of focusing on breaking up the British union, much energy, time and resources were committed to the forlorn objective of saving Britain from Brexit instead of saving Scotland from Britain. I was deeply uncomfortable with the strategy. Myself and many others within the independence movement are opposed to the fundamentally undemocratic nature of the EU and would rather an independent Scotland forged trading and cultural ties with the EU as a non-member state similar to Norway’s status. However 62% of Scots voted to remain in the EU and the SNP high command clearly felt a considerable number of them were NO voters in 2014 that could be won over to YES if the SNP fought Brexit hard.

The fundamental flaw with the strategy was its undemocratic nature. England and Wales voted, albeit narrowly, for Brexit in 2016. Over 85% of the electors in England and Wales voted for parties in the subsequent 2017 General Election who were committed to implementing the Brexit vote. There was no democratic legitimacy in seeking to ‘Stop Brexit’. Yet SNP efforts seemed almost exclusively dedicated to that undemocratic goal rather than the much more relevant and democratically underpinned goal of delivering #IndyRef2.

Unity is Vital but Not around Growth Commission Report

Although disagreeing with the strategy I stubbornly stuck with the project of promoting the SNP as the party of independence. I expressed my disagreements with their uninspiring and austerity riddled Growth Commission Report on independence and their dewy eyed and unjustified allegiance to and promotion of the EU as an institution, but called for maximum support for the SNP at the 2017 and 2019 General Elections. I was encouraged all along by the public announcements and statements from the First Minister which indicated #IndyRef2 would be held in line with the democratic mandate sought and secured. Sadly the opportunities in 2018/19 were not seized but subsequent statements assured me 2020 would be the year.

I fear I may have been conned. I may have been guilty of school boy naivety. I may have misplaced my trust. In my defence I cite the published Policy Memorandum of the Referendums (Scotland) Bill which is worth substantial quotation:

“In October 2016, the Scottish Government published a draft independence referendum Bill based on the model of the legislation for the 2014 referendum so that it would be ready for introduction should the Scottish Government conclude – and the Parliament agree – that independence is the best or only way to protect Scotland’s interests in the wake of the EU referendum. That draft bill was the subject of a public consultation that closed in January 2017. The responses, which were published and independently analysed, have informed the preparation of the framework Bill.

On 28 March 2017, the Scottish Parliament passed a motion mandating the Scottish Government to take forward discussions with the UK Government for a referendum on Scotland’s future, including independence. The First Minister wrote to the Prime Minister on 31 March to commence discussions leading to an order under section 30 of the Scotland Act 1998, as in 2013, to enable the Scottish Parliament to legislate for a referendum between the autumn of 2018 and the spring of 2019. In June 2017, the First Minister announced that she would give an update on next steps for an independence referendum “when the terms of Brexit were clear”.

On 24 April 2019 the First Minister gave a statement to the Scottish Parliament, setting out next steps on Brexit and Scotland's future. She said that the Scottish Government would take steps so the option of giving people a choice on independence later in the current term of the Parliament remained available. The Referendums (Scotland) Bill would help to facilitate that by ensuring that the rules for any referendum that is now, or in future, within the competence of the Scottish Parliament are clear”.

A Week before Speaking the FM Reiterated 2020 IndyRef2 Commitment

In irrefutable terms it is clear Scotland was to be given its #IndyRef2 between ‘the autumn of 2018 and spring of 2019’ and when that slipped it was changed to ‘later in the current term of the Parliament’. My faith was based on statements like that. Then only a week before the First Minister’s Brexit Day statement she reiterated her position in uncompromising terms during a TV interview:

A week before addressing the faithful assembled to hear the next steps in the independence campaign Nicola Sturgeon was strident and spot on when she reminded everyone that she fought and won the general election on a commitment to hold #IndyRef2 in 2020. I fully expected the much trailed speech to be the day she actually named the date for #IndyRef2. That was what I was waiting for and hoping for.

Instead I listened to a weak collection of words that called for ‘unity’ and ‘focus’ but lacked any real substance. Increasingly I fear Nicola actually believes Boris Johnson will ever grant a Section 30 Order permitting a referendum which Westminster will honour. It is a belief which is baseless and politically spurious.

There will not be a Section 30 Order or Westminster ‘permission’ to hold a referendum ever again precisely because the polls are too close to call and now consistently indicate a YES majority. I simply can’t believe that an intelligent and capable politician like Nicola believes Westminster, and particularly Boris Johnson, will ever agree to another independence referendum when the likelihood is they will lose. I stated it clearly four days before Nicola’s speech:

“SNP Westminster leader, Ian Blackford, has already accurately called out Boris Johnson as a ‘Democracy Denier’. There is not a snowball’s chance in hell that Johnson will agree to a Section 30 Order like 2012 which paved the way for a referendum Westminster was committed to recognise in 2014. Cameron only agreed at the time because he was in a weak position, relying on a coalition government and facing opinion polls that suggested the chance of a YES vote was so remote that it could be virtually ruled out.

Johnson is in an entirely different position. He sits with a stronger hand in Westminster with an 80 seat Tory majority and a recognition that with polls showing support for independence at least 50% he simply can’t afford the gamble. England needs Scotland’s economic prowess to survive. Contrary to the unionist lies Scotland has subsidised England for several decades now and anyone with a morsel of brain matter will realise that salient fact. If Scotland was truly an economic drain on England, a ‘subsidy junkie’ as we are often disparagingly labelled, the Tories would have cut us out of the glorious union long before now”.

The Referendums (Scotland) Bill is now a law with Royal Assent given on January 29th, two days before Nicola spoke. The Westminster sanctioned referendum route is a blind alley, a cruel waste of time that insults the dignity of every Scot.

We are a nation, a sovereign nation, who entered a voluntary union with England in 1707 without popular consent or support. We have the inalienable human right to decide we wish to leave that union. We cannot be held against our will. Nicola Sturgeon has earned the right to be given a last chance to lead us to independence. Perhaps she has been badly advised recently. However the road ahead is now clearer than ever.

Monday 6th April is a special day in Scotland’s history. The First Minister must convene a forum of politicians, civic leaders, trade union representatives and anti-poverty campaigners inside the Scottish Parliament. She must pay homage to the patriots who fought in the wars of independence against English invasion from 1296 under the brutal Edward I, King of England. Pay homage to the martyrs who faced superior forces at Stirling Bridge in 1297 but emerged victorious under the leadership of William Wallace. Pay homage to the warriors who faced King Edward II’s army three times greater than theirs in July 1314 on the Bannockburn fields yet over a two day battle led by Robert the Bruce routed the English and repelled the foreign invaders.

It was those battles and that commitment to Scotland’s freedom which led to the writing of the most critical document in Scotland’s history, the Declaration of Arbroath, signed and sent to the pope on 6th April 1320 demanding recognition of Scotland’s sovereignty and acknowledgement of Robert the Bruce as Scotland’s king:

"As long as but a hundred of us remain alive, never will we on any conditions be brought under English rule. It is in truth not for glory, nor riches, nor honours, that we are fighting, but for freedom - for that alone, which no honest man gives up but with life itself".

Today we should owe allegiance to no kings or queens and we should resolve matters of state and international affairs via peaceful means, not with weapons and the spilling of blood, but on the 700th anniversary of the iconic Declaration of Arbroath which enshrined Scotland’s sovereignty as an independent nation forever Nicola Sturgeon should do the right thing and call #IndyRef2. No seeking of permission from Boris Johnson. No bending the knee to Westminster rule. We tell Westminster Tories that Scotland is no longer their slave and inform them of the date for #IndyRef2.

Do the Right Thing First Minister – Name The Date

Of course they may challenge it in the courts. Bring it on. The three most recent opinion polls now show support for independence is higher than ever at between 50% and 52% while support for the right of Scotland to decide when to call #IndyRef2 is now at 56%.

We have nothing to lose and everything to gain by striking now while the iron is hot and pressing home the advantage of being ahead in the polls. The time for decisive and courageous leadership is now. As well as the Declaration of Arbroath our First Minister should draw inspiration from civil rights leader Martin Luther King who often had to face down rigged laws and defy authority in pursuit of fairness and justice:

Hopefully Nicola is up for the urgent tasks we face. The next few months will tell.