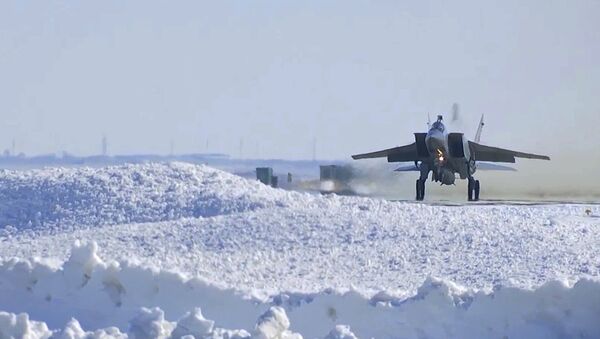 © Russian Defence Ministry
/
Go to the photo bank
Subscribe
According to Norwegian Intelligence Service boss Morten Haga Lunde, the Kinzhal, one of Russia's new missiles, can potentially strike a target in Norway with 40 minutes' warning time.

Focus 2020, an assessment of security challenges facing Norway prepared by the Norwegian Intelligence Service (E-Tjenesten), has singled out Russia and China as the major factors influencing the current threat picture and Norwegian interests.

“Russian and Chinese intelligence services intervene in all sectors of society in these countries. This is not a transitional phase”, E-Tjenesten's chief Lieutenant General Morten Haga Lunde said, as quoted by national broadcaster NRK, claiming that despite their differences both Russia and China were moving in a more “authoritarian” direction.

Lunde pointed out that Russia has strengthened the base structure of the Kola Peninsula and the northern part of the Barents Sea. Among other things, Lunde stressed that Russia is holding military exercises, such as “Ocean Shield”, and developing increasingly sophisticated weapons systems, such as the Avangard, which Vladimir Putin described as capable of rendering US defence systems ineffective.

In its report, E-Tjenesten indicated that Russian President Vladimir Putin presented six new weapons systems in his annual speech to the nation in 2018, including the intercontinental missile RS-28 Sarmat, which is referred to as the world's largest nuclear missile.

“Several of these have special characteristics and fall outside of established weapon categories. Both the arms development and the exercises show that Russia is developing a more dynamic military force”, Lunde stressed. “We are witnessing a military force capable of operating across the spectrum”.

According to Lunde, a number of the new “superweapons” have been tested in areas surrounding Norway. Lunde is concerned that they fall outside the current disarmament agreements, thus eroding international stability.

“We have observed flight tests of the air-delivered ballistic missile Kinzhal, one of the new weapons. Our calculations show that if this missile is fired from an aircraft over the Kola Peninsula, the alert time, given that we detect the activity, will be about 40 minutes from the aircraft's departure to the missile's strike at a target in Norway”, Haga Lunde said.

“Is Norway isolated in the world? No. Norway is part of the globalised system and the western system. These weapons pose a threat to Norway. There is a danger that Norway may fall behind Russian lines and with increased capacity it becomes difficult to prevent such a thing”, Lunde stressed.

Defence Minister Frank Bakke-Jensen suggested that Russia's exercise activity off Norway's coast has been too close.

“I believe it's unnecessary. Good neighbourliness requires that both parties pay attention to each other. I have expressed dissatisfaction with some of the exercise activity from Russia lately”, Bakke-Jensen said referring to Russia's manoeuvres in the Barents Sea.

About China, Morten Haga Lunde stressed that the country aims to be on par with the US militarily by 2050. At the same time, he warned of the new Digital Silk Road initiative, which would mean that China would try to take control of parts of the 5G network.

“This strengthens China's intelligence ambition and capacity. The significance of this can hardly be overestimated”, Lunde stressed.

E-Tjenesten's report is one of the four threat assessments presented annually, the rest coming from the Police Security Service (PST), the National Security Authority (NSM), and the Directorate for Civil Protection (DSB).

PST presented its annual threat assessment last week, focusing for the first time on right-wing extremists and radical Islamists. In addition to politically motivated violence, the PST also highlighted state-sponsored intelligence, digital mapping, and sabotage of critical infrastructure as the most serious threats to Norway. For the first time, Iran was also mentioned explicitly in this regard.

“Although Russian, Chinese, and Iranian intelligence activities are considered to have the highest potential for damage, other countries' covert activities can also harm Norway, Norwegian businesses and individuals”, the threat assessment said.

In recent years, bilateral Russian-Norwegian relations have soured amid reciprocal spying accusations. While Norway is unnerved by the modernisation of the Russian military in the North it sees as assertive, Russia is alarmed by Norway's large-scale cooperation with the US and its NATO allies, including the polar radars in Vardø and the US marine deployment, it sees as provocation.

000000
Popular comments
What does peaceful, allegedly non-nuclear, Norway expect, when being so loyal to NATO and antagonizing Russia? Bet Russian missiles could reach Norway a lot faster than 40 minutes.
anne00marie
11 February 2020, 10:29 GMT10
000000
Maybe he will find that missing sock while he is hiding under the bed.