BELGRADE (Sputnik) - North Macedonian lawmakers on Tuesday ratified by an overwhelming majority of votes a protocol on the country's accession to NATO.

"A total of 114 lawmakers [out of 120] voted in favour of ratification", President of the Assembly Talat Xhaferi announced after the vote.

North Macedonia's path toward NATO membership opened after it signed a deal with Greece last June that resolved their years-old row over Macedonia's official denomination. Athens has repeatedly blocked country's accession to the military alliance due to the naming dispute, but in October 2019, the North Macedonian parliament started the process of renaming the country.

The nation signed an accession protocol to become a member of the alliance in February 2019. The Balkan nation becomes the North Atlantic Alliance's 30th member. The last country to join the military organisation was Montenegro back in 2017, which was preceded by Albania and Croatia in 2009.

Moreover, North Macedonia was also set as a priority country for EU expansion during the 2003 European Council summit in Greece, as it was initially planned that accession negotiations with North Macedonia and Albania would start by the end of 2019. Discussions on the bloc's expansion have reportedly been delayed by tensions between the EU's leading states, Germany and France. Paris has repeatedly expressed caution about enlarging the European Union. 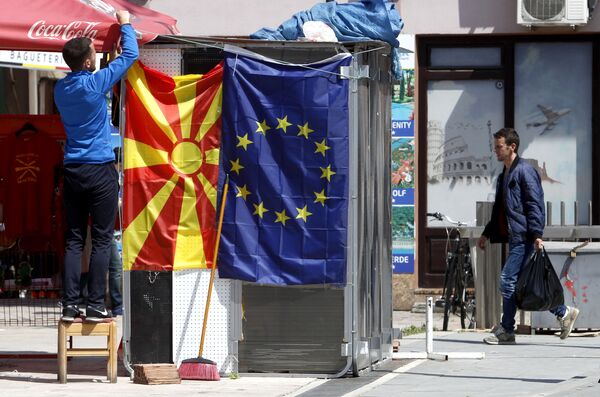 In January, German Chancellor Angela Merkel argued that she would be pushing for the start of EU accession negotiations with Albania and North Macedonia at the next European Council summit in March.