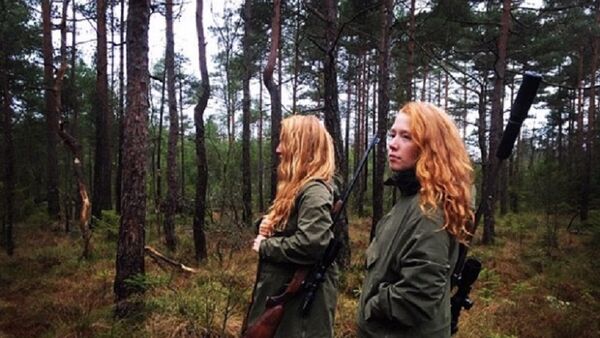 © Photo : Hunt_hike
Subscribe
Unperturbed by the hate messages they receive, the red-haired sisters who in their early days took part in the Danish edition of X-factor and performed as a band called Paint it Red, intend to continue “filling their freezer with high-quality game meat”.

Rikke and Trine Jacobsen, 26-year-old twin sisters from Denmark, who have been hunting with their father since the age of ten, have received online abuse and even death threats from animal rights activists over the gory photographs of game posted on their Instagram.

After years of following their father, Borup natives Rikke and Trine, a vet nurse and physiotherapist, have received their own hunting licenses and started an Instagram channel called Hunt & Hike. The assortment on their page includes a plethora of trophies, ranging from ducks and pheasants to deer and even boars. Some of the pictures posted include an assortment of guns, bloodied knives after a hunt, skinned carcasses and the sisters themselves posing with their kills.

This time of year my Dad, Twinsis and I travel to the scottish highlands. 🏴󠁧󠁢󠁳󠁣󠁴󠁿Unfortunatly this year I am currently working as a veterinary nurse in Lapland, but hopefully in october we get the chance to hunt these rewarding animals in beautiful scottish surroundings again. Tonight I look back on this fantastic memorable Scottish Lad. 🤍 #højlandshjort#scotland#stag#hunting#huntingseason#hunter#huntressview#highlands#highlanders#redheadedwoman#seelandhunting#seeland_official#beautiful#huntinglife#wildlife#worldtraveler#wilderness#wildlifeonearth#intotheunknown#intothewild#huntgram#huntresslife#memorable#myscottishlad

The photographs and the hunting stories posted frequently end up in the sisters receiving online abuse.

“A guy said to me once, 'you may also suffer the same fate as the poor animals you are killing'. Another guy wrote me a message once that I was a 'killer sl*t'”, Rikke told The Sun.

Unperturbed by the hate messages, the sisters intend to continue “filling their freezer with high-quality game meat”.

“There is nothing like sitting down with a steak that you procured yourself by hunting”, Trine said, describing hunting as “the most self-sustainable you can get”. “Hunting gives you the freshest, healthiest and most ethically killed meat. That’s why we hunt”, she added.

The Jacobsens described hunting and cooking meat they have hunted as a “gratifying experience”, adding that it adds to self-sufficiency and strengthens their friendship thorough “unforgettable experiences”.

“The best thing with hunting or all kinds of adventures is to share it with the ones you love. Rikke and I are so close, and to have this together has brought us even closer”, Trine said.

“The thought that we have this passion together is what I love, and it has brought us closer together with our father”, Rikke added.

By Rikke's own admission, despite the smiling photographs, it's not uncommon for the hunters to feel remorse over their kills, because they they don't hate, but respect them.

“We respect all wildlife and animals, even though we go hunting. We do not harvest wildlife, we kill and eat them, but we respect it. Without wildlife in our world, we would have nothing. So every time we kill, we say ‘thank you’ for the opportunity”, Rikke told The Mirror.

In their teens, the Jacobsen twins rose to national fame by participating in the Danish X-Factor and forming a duo called Paint it Red.

Greyfox
11 February 2020, 10:35 GMT4
000000
They think only of themselves but never of the animals they kill, the shortage of prey for endangered species and the real possibility that animals will go extinct from the additional stress imposed on their lives. Humans raise cattle precisely because hunting is not sustainable - not by one set of hunter sisters and most certainly not as a means of self sufficiency by mankind. If everybody goes hunting for mere self adulation - which is really the true motive of these sisters - there will soon not be any animals left in the world. How sad is that.
Regula
11 February 2020, 11:38 GMT4
000000
Newsfeed
0
New firstOld first
loader
LIVE
Заголовок открываемого материала
Access to the chat has been blocked for violating the rules . You will be able to participate again through:∞. If you do not agree with the blocking, please use the feedback form
The discussion is closed. You can participate in the discussion within 24 hours after the publication of the article.
To participate in the discussion
log in or register
loader
Chats
Заголовок открываемого материала
Worldwide
InternationalEnglishEnglishMundoEspañolSpanish
Europe
DeutschlandDeutschGermanFranceFrançaisFrenchΕλλάδαΕλληνικάGreekItaliaItalianoItalianČeská republikaČeštinaCzechPolskaPolskiPolishСрбиjаСрпскиSerbianLatvijaLatviešuLatvianLietuvaLietuviųLithuanianMoldovaMoldoveneascăMoldavianБеларусьБеларускiBelarusian
Transcaucasia
ԱրմենիաՀայերենArmenianАҧсныАҧсышәалаAbkhazХуссар ИрыстонИронауОssetianსაქართველოქართულიGeorgianAzərbaycanАzərbaycancaAzerbaijani
Middle East
Sputnik عربيArabicArabicTürkiyeTürkçeTurkishSputnik ایرانPersianPersianSputnik افغانستانDariDari
Central Asia
ҚазақстанҚазақ тіліKazakhКыргызстанКыргызчаKyrgyzOʻzbekistonЎзбекчаUzbekТоҷикистонТоҷикӣTajik
East & Southeast Asia
Việt NamTiếng ViệtVietnamese日本日本語Japanese俄罗斯卫星通讯社中文（简体）Chinese (simplified)俄罗斯卫星通讯社中文（繁体）Chinese (traditional)
South America
BrasilPortuguêsPortuguese
NewsfeedBreaking
14:23 GMTAttempts to Contain or Besiege China Will Always Fail, Ambassador to London Says
14:15 GMTTrump Reportedly Told Putin He’d ‘Act a Little Tougher’ With Him When Cameras Were Around
14:13 GMTHaiti Accepts US Decision on Migrants Returns, Ready to Welcome Back Deported Citizens
14:01 GMTUK Condemns North Korea’s Short-Range Missile Test
13:46 GMTMarine Le Pen Promises Immigration Referendum if She Becomes President in 2022
13:41 GMTVaccine Production Facilities Should Be 'Kept Warm' in Case Future Pandemic, BioNTech Says
13:39 GMTUS Top Military Officials Testify Before Senate Armed Services Committee on Afghanistan
13:28 GMTIranian Official Says US Has No Right to Comment on Ties Between Tehran, IAEA
13:22 GMTAs Old Faces Leave Congress, Kanhaiya, Jignesh Are 'Icons of Hope' on Anti-Modi Side, Says Expert
13:17 GMTTwo Palestinians Injured in Clashes With Israeli Forces in West Bank, Reports Say
13:14 GMTYellen: Treasury Will Exhaust Measures on 18 Oct if Congress Doesn't Raise Debt Ceiling
12:57 GMTMessi Should Respect No. 1 Mbappe at PSG, Says Ex-Arsenal Star Anelka
12:52 GMTUS Court Indicts Lawyer for Perjury in 2016 Presidential Election Meddling Case
12:47 GMTBarack Obama Defends Presidential Center Site, Vows Litigation-Mired Project to ‘Benefit Community’
12:47 GMTGOP Furious Over Report Pentagon Asked to Access Russian Central Asian Bases to Monitor Afghanistan
12:43 GMTAt Least 9 People Reportedly Injured After Double Terrorist Attack in Syria
12:30 GMTRussian Diplomat Praises Hungary's 'Optimal' Choice of New Routes for Russian Gas Supplies
12:26 GMTLa Palma Volcano in Canary Islands Continues to Erupt
12:25 GMT'Like Finding King Tut's Tomb': Sealed Chamber Reportedly Found in 'Neanderthal Cave' in Gibraltar
12:21 GMT100+ Chinese Soldiers Reportedly Cross Border, Damage Indian Bridge