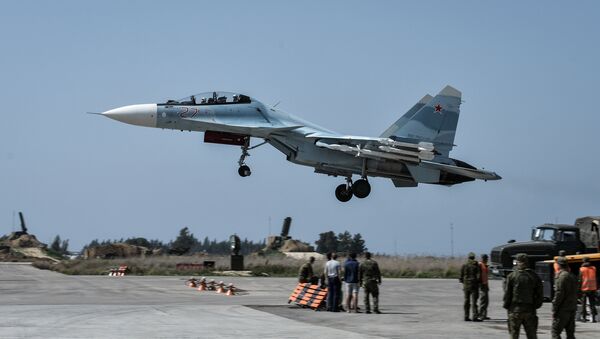 "On the evening of 9 February, when it became dark, the air defence of the Russian air base Hmeymim detected and repelled two attacks that used combat unmanned aerial vehicles launched from the area of the Idlib de-escalation zone controlled by militants", Borenkov said.

There were no casualties or material damage, and the base continues to work as usual, Borenkov said.

This is not for the first time the Russian base has been targeted in a drone attack. Earlier in the month, Russian air defences repelled another attack, destroying what was described as "a small-sized aerial target (UAV) of unknown origin" on a distant approach to the base. The base and personnel sustained no damage, according to a Russian Defence Ministry statement.

Syria has been significantly crippled by an eight-year war between pro-government troops, militants from various groups that oppose the administration of Syrian President Bashar Assad, and terrorist groups such as the Nusra Front* and Daesh*. The latter has lost ground in recent years due to massive operations carried out by the Syrian government.

The conflict in the country has produced an estimated 12-13 million refugees, with over 6 million internally displaced. Of the Syrians affected in one of the worst humanitarian crises on the planet - according to the United Nations - nearly half are children and require immediate and ongoing humanitarian assistance.

Russia, along with Turkey and Iran, are the guarantors of the ceasefire in war-torn Syria. Russia carries out ongoing and regular humanitarian operations across the country while assisting Damascus in providing safe passage for the return of the nation's refugees.

Nusra Front, Daesh are terrorist groups banned in Russia and many other countries.