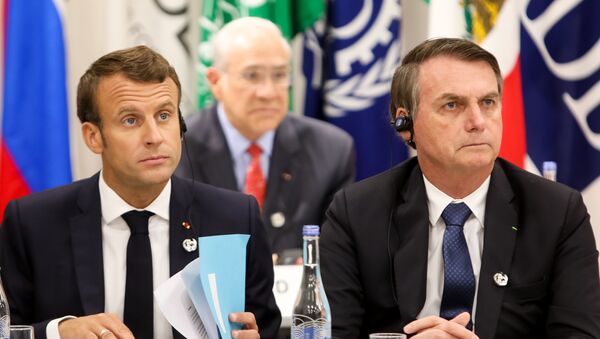 CC BY 2.0 / Palácio do Planalto / Parallel Meeting of G20 Leaders on Digital Economy
Subscribe
The political-turned-personal row between French President Emmanuel Macron and Brazilian counterpart Jair Bolsonaro in 2019 over the ongoing Amazon wildfires has caused some at the top of Brazil’s military, recently tasked with identifying the main threats facing their country in the next 20 years, to offer a curious bad guy.

French diplomats jokingly responded to a leaked military report in which high-ranking Brazilian officials identified France as their country’s main strategic threat over the course of the next 20 years. The secret draft, titled “Defence Scenarios 2040”, was initially obtained by the Folha de Sao Paulo newspaper.

According to the outlet, the document contains answers from 500 respondents, mostly in the military, and is believed to have greatly contributed to the ongoing review of the nation's defence strategy. The answers were allegedly recorded over the course of 11 meetings held during the second half of 2019, and are believed to reflect a general sentiment among the high-ranking members of the country’s forces.

In four strategic scenarios mentioned in the document, France was reportedly listed as the most consistent threat to Brazil, reflecting the deteriorating relationship between the two states following a political row for several weeks during summer 2019, between Brazilian President Jair Bolsonaro and French counterpart Emmanuel Macron, over ongoing wildfires that have continued to rage in the Amazon rainforest.

At the August 2019 G7 summit, Macron backed the idea of giving the world’s largest rainforest - often called “the lungs” of the Earth - international status. Bolsonaro quickly denounced the idea, accusing Macron of a “colonialist mentality” and attempting to undermine Brazil’s sovereignty. 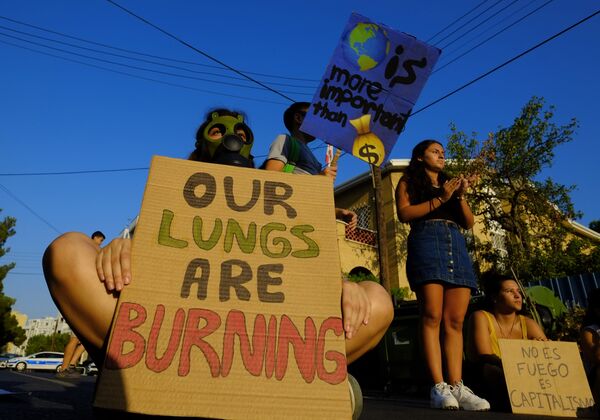 Protesters with banners block the road outside of the Brazilian Embassy during a protest in Nicosia, Cyprus
© AP Photo / Petros Karadjias

The diplomatic row over the destruction of the Amazon rain forest stipulated the scenario of a potential request by Paris for UN approval for intervention into indigenous lands in 2035, while concurrently backing the emancipation of a local Yanomami tribe whose life is threatened by encroaching factory farms.

Not all of the Brazilian military predictions listed in the document sound realistic, however, as some go as far as to suggest that the country should be prepared for a deadly attack that would use the Wuhan coronavirus against participants in the Rock in Rio music festival in 2039.

The French embassy in Brazil later responded to the publication of the leaked document, branding it as being based on the “limitless imagination” of its authors, suggesting that it ignored the fact that France remained the country’s “main military partner” and a close friend.

Brazil’s Ministry of Defence also weighed in on the controversy surrounding the report. It did not deny the authenticity of the poll, but argued that the document was not a reflection of the government’s position and was only a part of “academic work” and “the first draft of a preparatory study”.

000000
Popular comments
Macron you can't handle the problems in your own country, (yellow vest protest) don't tell other countries what to do.
parkerjoe
11 February 2020, 02:26 GMT2
000000
That's Rich, a colonialist calling another colonialist a "colonialist"!! So sad that everything in "Latin" America is European, the language, the religion, business (locals of European descent just stepped in and continued the raping and pillaging where Spaniards/Portuguese left off), and society as a whole. The Americas should be called New Europe!
Dang!
12 February 2020, 00:03 GMT1
000000
Newsfeed
0
New firstOld first
loader
LIVE
Заголовок открываемого материала
Access to the chat has been blocked for violating the rules . You will be able to participate again through:∞. If you do not agree with the blocking, please use the feedback form
The discussion is closed. You can participate in the discussion within 24 hours after the publication of the article.
To participate in the discussion
log in or register
loader
Chats
Заголовок открываемого материала
Worldwide
InternationalEnglishEnglishMundoEspañolSpanish
Europe
DeutschlandDeutschGermanFranceFrançaisFrenchΕλλάδαΕλληνικάGreekItaliaItalianoItalianČeská republikaČeštinaCzechPolskaPolskiPolishСрбиjаСрпскиSerbianLatvijaLatviešuLatvianLietuvaLietuviųLithuanianMoldovaMoldoveneascăMoldavianБеларусьБеларускiBelarusian
Transcaucasia
ԱրմենիաՀայերենArmenianАҧсныАҧсышәалаAbkhazХуссар ИрыстонИронауОssetianსაქართველოქართულიGeorgianAzərbaycanАzərbaycancaAzerbaijani
Middle East
Sputnik عربيArabicArabicTürkiyeTürkçeTurkishSputnik ایرانPersianPersianSputnik افغانستانDariDari
Central Asia
ҚазақстанҚазақ тіліKazakhКыргызстанКыргызчаKyrgyzOʻzbekistonЎзбекчаUzbekТоҷикистонТоҷикӣTajik
East & Southeast Asia
Việt NamTiếng ViệtVietnamese日本日本語Japanese中国中文Chinese
South America
BrasilPortuguêsPortuguese
NewsfeedBreaking
07:37 GMTFinnish Defence Ministry Demands Risk Assessment for Nuclear Plant Project Over Russian Ties
07:36 GMTCOVID in Israel May Be Under Wraps Now, But a Fifth Wave Looms Large, Experts Warn
06:23 GMTDenmark Sees Record Infection Spread Despite High Vaccination Rate
06:05 GMTUK Autumn Budget: Labour Shadow Chancellor Accuses Treasury of 'Smoke and Mirrors' Policy
05:31 GMTLive Updates: Sudan's PM Transported to Unknown Location After 'Refusal to Back Coup'
05:17 GMTDanish Conservative Politician Sparks Uproar With Photo in See-Through Lingerie
04:27 GMTSudanese Opposition Union Calls on People to Protest Against Military Coup
04:00 GMT'What's-His-Name?' Nancy Pelosi Appears to Forget Donald Trump's Name
03:17 GMTFacebook Exec Reportedly Warns Employees of 'More Bad Headlines' to Come
03:16 GMTSudan’s Prime Minister Under House Arrest, 4 Ministers Detained - Reports
02:16 GMTIsrael Going Further With Construction of Over 1,300 Housing Units in West Bank
01:15 GMTPandemic Will End When World Chooses to End It, WHO Chief Says
YesterdayJamie Lynn Spears Says Parents Pressured Her to Get an Abortion to Maintain Her Career
YesterdayFriends Alum James Michael Tyler Dead After Battle With Prostate Cancer Battle
YesterdayMeghan McCain Thanks Trump for Publicity After 45's Scathing Statement Against Her Late Father
YesterdaySmoke in the Cabin Forces American Airlines Flight to Make an Emergency Landing
YesterdayColombia Getting Ready to Extradite Most Wanted Drug Dealer Otoniel to US - Minister
YesterdayQatar Frustrated About Lack of Response From US to Request for Drone Sale - Reports
YesterdayMax Verstappen Wins US Formula One Grand Prix, Lewis Hamilton Finishes Second
YesterdayOld Trafford Has Fallen: Liverpool Desecrate Manchester United on Hallowed Ground