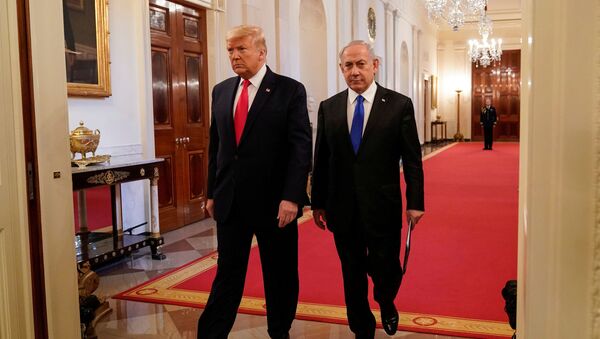 © REUTERS / JOSHUA ROBERTS
Subscribe
Ekaterina Blinova
All materialsWrite to the author
Donald Trump's "deal of the century" has broken the decades-long stalemate with regard to the Israeli-Palestinian issue, says Israeli political commentator Nelly Gutina, explaining how the US' Middle Eastern plan affects the Israeli political landscape, completely diverting attention from Benjamin Netanyahu's trial.

The "deal of the century", the long anticipated Middle East peace plan released by Donald Trump on 28 January, has overshadowed the Israeli internal political struggle between Prime Minister Benjamin Netanyahu and his major opponents – the Kahol Lavan coalition and Yisrael Beiteinu.

Kahol Lavan's Benny Gantz and Yisrael Beiteinu's Avigdor Lieberman have been at the forefront of the effort to disrupt Netanyahu's immunity bid, aimed at shielding the prime minister from charges of corruption fraud and breach of trust. However, instead of taking up the fight, Netanyahu, who denies any wrongdoing, withdrew his immunity request saying that he did not want to take part in a "dirty game" propelled by his antagonists in the Knesset.

Netanayhu was then formally indicted by the Jerusalem District Court on 28 January – the date when Trump's Middle East deal was announced. As the Jerusalem Post noted on 3 February, ever since then, the prime minister's trial has "stopped making news".

"The timing of the "deal of the century's" publication in the midst of the Israeli political crisis and on the eve of the third snap election [scheduled for 2 March] inevitably made it a factor in Israeli domestic politics", says Nelly Gutina, an Israeli author and political commentator.

In accordance with Trump's plan, Israel proclaims sovereignty over key areas of the West Bank, including the Jordan Valley and the Jewish settlements. The deal envisions the creation of a Palestinian state in part of the West Bank, the Gaza Strip, some areas of southern Israel and a few neighbourhoods in Eastern Jerusalem in case Palestinian Arabs officially recognise Israel as a Jewish state and disarm all its militant groups including Hamas.

​The Israeli author draws attention to the fact that Gantz voiced his support to the deal along with Netanyahu. However, the Kahol Lavan leader was immediately subjected to ridicule by the prime minister for his remark that he would implement the deal only with the agreement of the international community.

"With whom?" Netanyahu asked as quoted by The Times of Israel. "The European Union already announced that it opposes it. The UN? With the agreement of Abu Mazen [Mahmoud Abbas' nickname]? Gantz is cute, but he is not a leader".

Meanwhile, Trump's Middle Eastern initiative may further affect the Israeli political landscape, according to Gutina, who notes that while Netanyahu and Kahol Lavan's Gantz endorsed the plan, the radical left and some extreme right forces resisted Trump's strategic vision.

"In electoral terms, this may result in HaAvoda-Merets coalition's disappearance as a relevant factor in Israeli politics. Having become the central factor on the agenda, Trump's plan can weaken the party of Lieberman, but at the same time greatly strengthen the Arab party of the Arab United List", the Israeli author suggests.

On 1 February, during an emergency meeting in Egypt, the Arab League dismissed the US' Middle Eastern plan saying that that "it does not meet the minimum rights and aspirations of Palestinian people".

Gutina says that though the Arab League abandoned Trump's initiative, "one should not expect active resistance on the part of Arab nations because the Palestinian issue has not been central to their agenda for a long time".

"The Arab countries – each for its own reasons – are facing numerous external threats and internal challenges so that they are unlikely to care much about Palestinian Arabs. Therefore, they will not support the next round of protests by the Palestinians", she suggests, adding that one cannot say the same about Iran.

While not believing that the much-anticipated deal will finally be struck between Israel and the PA Gutina says that the meaning of the plan is "that it is changing paradigms and challenging the decades-long international consensus on the Israeli-Palestinian issue".

"The paradox is that it was this consensus that has led to stagnation, and in this sense, Trump's plan breaks the stalemate and introduces new dynamics", she adds.

000000
Popular comments
What new dynamics? Israel steals land and murders Palestinians while the world watches, what has change in the last 70 years?
parkerjoe
9 February 2020, 08:36 GMT5
000000
The new dynamic is increased war and not peace. Israeli terrorism began in Palestine and continues to this very day. And now Palestine is and has been an ongoing victim of Israel/USSA’s War OF Terror.