Ilya Tsukanov
All materialsWrite to the author
During the 2016 race, Trump campaign chairman Paul Manafort was caught up in a scandal when his name appeared in a ‘leaked black ledger’ of alleged off-the-books payments from pro-Russian politicians in Ukraine. The document became one of the core pieces of evidence used by the president’s opponents to accuse him of colluding with the Kremlin.

The ‘black ledger’ of alleged secret cash payments to lobbyist and political consultant Paul Manafort was completely made up and the FBI knows it, investigative journalist John Solomon has reported, citing sources.

Speaking to Solomon, Rick Gates, Manafort’s former business partner and cooperating witness in the FBI investigation on possible Russia-Trump collusion, said that the ledger “was a fabrication,” and adding that “this fact has since been proven true.”

The ledger, first publicized in the New York Times in the summer of 2016, was one of the two major pieces of evidence used by Donald Trump’s opponents in the media and state to try to link the real estate mogul to Moscow, with the other being the so-called Steele Dossier. The latter document, compiled at the behest of the Democratic Party by a British ex-spook, became the pretext for the FBI to start spying on the Trump campaign, but has since similarly been discredited as a complete fabrication. Christopher Steele, former British intelligence officer in London Tuesday March 7, 2017 where he has spoken to the media for the first time . Steele who compiled an explosive and unproven dossier on President Donald Trump’s purported activities in Russia has returned to work
© AP Photo / Victoria Jones/PA

In an April 2018 interview with special counsel Robert Mueller, Gates, who reached a plea deal to testify against Manafort in a criminal case relating to tax evasion and bank fraud, told investigators that the ledger was “completely made up.”

Commenting on the New York Times piece which made the ‘black ledger’ claims public in his testimony to the FBI, Gates insisted that the article was “completely false,” adding that “as you know there were no cash payments. The payments were wired. The ledger was completely made up…It was not how the PoR [Party of Regions – the party of former Ukrainian President Viktor Yanukovych, whose campaign Manafort advised] did their record keeping.”

Gates further told the FBI that the ledger could not be real, because the party’s accounting records were destroyed in early 2014 in the midst of the US and EU-backed coup d’etat in Ukraine. “All the real records were burned when the party headquarters was set on fire when Yanukovych fled the country,” Gates recalled. Supporters of the opposition on Maidan Square in Kiev during the clashes between protesters and the police. (File)
© Sputnik / Andrey Stenin

The FBI and prosecutors in Manafort’s criminal case appeared to have corroborated Gates’ conclusions by their actions, or more precisely inaction, failing to mention it in Manafort’s 2018 trial on charges of tax and bank fraud.

Similarly, the ledger was not discussed at any length by Mueller in the special counsel’s exhaustive 488 page report searching for evidence of collusion between President Trump and Russia. Mueller released the long-awaited report in April 2019, exonerating the president and his staff, and concluding that the only alleged substantive Russian effort to meddle in the election was linked to an online trolling campaign which proved to have no impact whatsoever on the election results.

The FBI has yet to publicly comment on its conclusions regarding the black ledger.

According to Solomon, “if true, Gates’ account means the two key pieces of documentary evidence used by the media and FBI to drive the now-debunked Russia collusion narrative – the Steele dossier and the black ledger – were at best uncorroborated and at worst disinformation. His account also raises the possibility that someone fabricated the document in Ukraine in an effort to restart investigative efforts on Manafort’s consulting work or to meddle in the US presidential election.”

Ukraine made no secret about its preference for Democratic presidential candidate Hillary Clinton during the 2016 campaign, expressing concerns about Trump’s campaign promises of trying to improve relations with Moscow, revoke anti-Russian sanctions or even recognize the status of Russia’s Crimea. In August 2016, Ukrainian officials openly revealed to the Financial Times the extent of their involvement in the US campaign, with Ukraine’s National Anti-Corruption Bureau linked to the ‘leak’ of the ledger to US media. 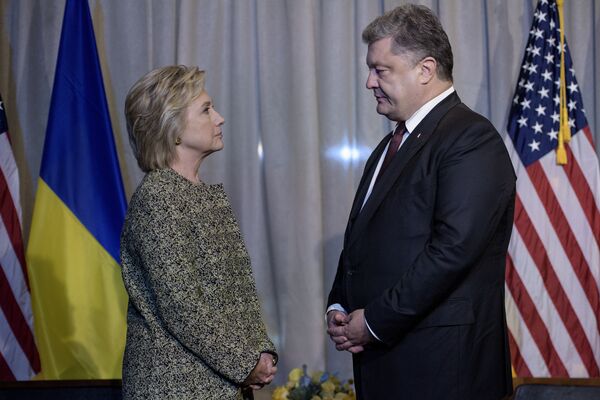 In late 2018, a Ukrainian court ruled that Artem Sytnyk, former head of the National Anti-Corruption Bureau, and Serhiy Leshchenko, an ally of Ukraine’s post-coup President Petro Poroshenko, illegally interfered in the 2016 US election with the release of the black ledger. The ruling was overturned on a technicality, but Ukrainian Prosecutor General Yuriy Lutsenko told The Hill in May 2019 that he had opened a fresh probe into the case following the election of Volodymyr Zelensky as Ukraine’s new president.

Ukraine ended up proving central to the drawn out Trump impeachment saga, with the Democrats accusing the president of illegally pressuring Zelensky to restart a frozen investigation into the possible pay-to-play corruption of former Vice President Joe Biden and his son Hunter in Ukraine between 2014 and 2019. Last week, Trump was acquitted of the charges against him following a senate trial.