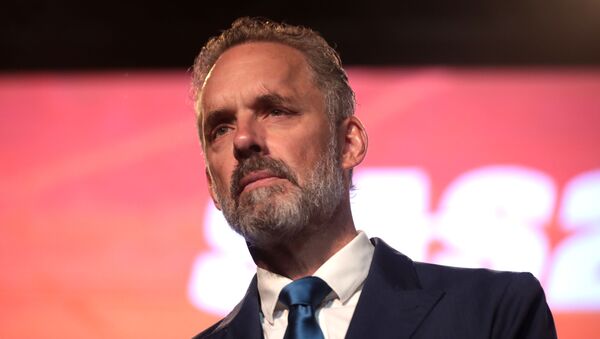 CC BY 2.0 / Gage Skidmore /
Subscribe
The Canadian professor’s health sparked concerns just month ago, when he had to check into rehab to take himself off an anti-anxiety drug that caused adverse effects and made him suicidal.

Jordan Peterson has made a “desperate” decision to seek drug detox treatment in Russia after several failed attempts at North American hospitals.

His daughter Mikhaila said in a video from Russia that Peterson had been prescribed a low dose of benzodiazepine “a few years ago” to treat anxiety caused by a severe autoimmune response to food (in an earlier video, she identified it as clonazepam, a type of medication of the benzodiazepine class). Jordan had also adopted Mikhaila’s all-beef diet, which he said fixed some of his health problems.

However, his anxiety apparently grew stronger after his wife of 30 years, Tammy, was diagnosed with terminal cancer, and the dose of the drug was increased last April. That lead to the professor suffering from “both a physical dependency and a paradoxical (opposite to the intended effect) reaction to the medication,” Mikhaila recounted.

Jordan Peterson tried and failed to wean himself off the drug on his own, and had to check into rehab in September to get it off his system.

In an emotional interview just before he first entered rehab, Peterson said he was in distress because of his wife’s health problems. “I’ve become opened up to the trouble that people have in a way that far exceeds even what I experienced as a clinical psychologist,” Peterson said with tears in his eyes. “I don't know exactly what the cumulative effect has been on me.”

Mikhaila recalled that her father had been “in unbearable discomfort” from the drug for the last eight months, which included a condition called akathisia – a frequent effect of antipsychotics, characterised by a feeling of irresistible restlessness and urge to move – which she said made him “suicidal”.

He spent four weeks in the ICU (intensive care unit) and then a decision was made “in extreme desperation” that he would go to Russia because there was “no better option”.

“After several failed treatment attempts at North American hospitals, including attempts at tapering and microtapering, we had to seek an emergency medical benzodiazepine detox, which we were only able to find in Russia,” she said, adding that things got worse when Jordan developed pneumonia in one of the previous hospitals.

Mikhaila on Friday shared Instagram stories of herself getting groceries in Eliseevky, a grand art nouveau Moscow supermarket from before the revolution, and walking around the city centre.

“Finally, dad is on the mend,” she reassured, “even though there’s a lot of physiological damage that he needs to recover from.”

“He’s improving and he’s off with the horrible medication. His sense of humour is back, he’s smiling again for the first time in months, but he still has a long way to go to recover fully.

In her words, both the Petersons and Russian doctors believe that his addiction was physical rather than psychological.

She said the next update will come from Jordan Peterson directly.

Joepa
8 February 2020, 10:02 GMT2
000000
Benzodiazepines, the most common representative being Valium, are suitable only for short term treatment. Doctors are well aware of this. Prescribing them on the long term means to foster a physical addiction that is more resilient than a Heroin addiction. The professionals in Russia will fix him up, I have no doubt. It will take 6 Months.