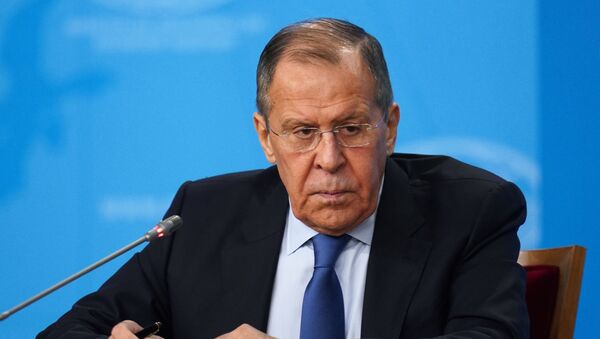 Upon his arrival at the airport, the top Russian diplomat was welcomed by his Venezuelan counterpart, Jorge Arreaza. The two are also scheduled to have bilateral talks.

"The crisis in Venezuela is a result of attempts to launch a large-scale campaign aimed at ousting the legitimate government with use of all options, as organisers of this campaign say, including use of force. We consider such scenarios completely unacceptable", Lavrov said.

Russia's foreign minister called lifting the US economic sanctions imposed on Venezuela as soon as possible is one of the foremost tasks for all Venezuelan patriots, adding that the sanctions had been introduced to undermine the situation in the country, with the common people being hardest hit by these actions, regardless of their political views.

"We have firmly emphasised our adherence to respecting Venezuela's sovereignty, our solidarity with the Venezuelan leadership and the Venezuelan people in their struggle against an illegal pressure by the United States and its accomplices", the diplomat added.

Washington's restrictions have been imposed on Caracas for years. After opposition leader Juan Guaido illegally proclaimed himself interim president of Venezuela, the US imposed further sanctions on the country's officials and companies in a bid to exacerbate the country’s already dire situation and dislodge Maduro.

"We expect you to have a common approach to approval of new members of the National Election Council and preparation for elections to the National Assembly in 2020. By the way, I am sure that these elections are the only opportunity for radicals not to deprive themselves of any future in Venezuelan politics", Lavrov said.

The Russian top diplomat also praised the work done by the Roundtable of National Dialogue, a forum that brings together government officials and moderate opposition, noting its inclusive nature, unlike other negotiation mechanisms. Lavrov said that Maduro had promised that the National Roundtable would stay open to all parts of society.

Russia and Venezuela agreed to deepen coordination of actions on the international arena and to further develop economic and humanitarian ties in face of illegal US sanctions, Lavrov said.

A Russian-Venezuelan commission on trade and economic cooperation will convene in May, Lavrov said.

He added that Russia and Venezuela would also further develop defence industry cooperation to boost Venezuela's defence capability in the face of external threats.

Additionally, Lavrov said he discussed with his Venezuelan counterpart and the vice president the concrete steps to timely implement agreements between Russia and Venezuela.

Maduro Reaffirms Caracas' Devotion to Democracy in Talks With Lavrov