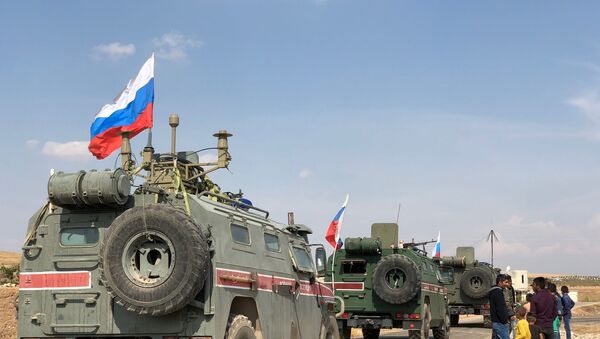 MOSCOW (Sputnik) - Units of the Russian military police carried out a patrol in Syria's northeastern Hasakah province on Thursday on their own, as their Turkish counterparts failed to arrive at the mission starting point, Major General Yuri Borenkov, the head of the Russian Defence Ministry's Reconciliation Centre in Syria, said.

"Since the Turkish forces have not arrived to participate in the joint patrol mission, the units of the Russian military police patrolled the route on their own ... in the province of Hasakah", Borenkov said at a daily news briefing, adding that Russia also continued patrols on several routes in the Aleppo province.

According to Borenkov, the patrolling was carried out per the agreed plans and no incidents took place.

The patrols are part of a Russia-Turkey deal on creating a buffer zone in northern Syria.

Following talks between Russian President Vladimir Putin and his Turkish counterpart, Recep Tayyip Erdogan, the Russian-Turkish memorandum was signed on 22 October in Russia's Sochi, which stipulates conditions for the peaceful withdrawal of Kurdish militia, designated by Ankara as terrorists, in Syria to a distance of 30 kilometres (18.6 miles) from the border with Turkey.