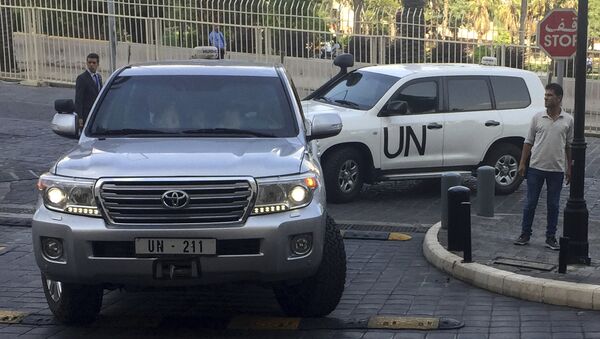 © AP Photo / Bassem Mroue
Subscribe
The chemical weapons watchdog found itself at the center of an international scandal late last year after whistleblowers accused the agency of leaving out key material evidence to fit the Western narrative about the culprit of the alleged chemical attacks in Douma, Syria in 2018.

The Organization for the Prohibition of Chemical Weapons (OPCW) has completed an internal review regarding the pair of whistleblowers who attacked its “contradictory” and “sanitized” report on the alleged April 2018 Douma chemical attack, claiming the leakers were not credible and proposing new security measures to prevent leaks in the future.

According to the agency, the two whistleblowers, referred to as “Inspector A” and “Inspector B,” were “not-whistleblowers,” but “individuals who could not accept that their views were not backed by evidence.”

The former inspectors in question had “manifestly incomplete information about the Douma investigation,” and “therefore, as could be expected, their conclusions are erroneous, uninformed, and wrong,” the organization added.

One of the ‘Inspector A and B’ handles was an apparent reference to former OPCW specialist Ian Henderson, who has condemned the final Douma report, and said that it disregarded “findings, facts, information, data or analysis” collected by his team pertaining to witness testimony, toxicology studies, chemical analysis and ballistics.

Henderson, who visited Douma as part of the agency’s fact-finding mission, has publicly blasted the “sanitized” report on the alleged Douma attack, saying its manipulation was so blatant in its disregard of the evidence that it put serious doubt on whether a chemical attack took place at all, much less who was responsible. The central thesis of his findings was that the chemical canisters allegedly containing chlorine used in the attack were “manually placed” in Douma instead of being airdropped, with these findings contradicting the US and allied narrative blaming the Assad government for the attack.

The other ‘Inspector’ was presumably a reference to ‘Alex’, an elusive whistleblower whose identity has not been revealed, and who has provided materials to WikiLeaks similarly casting major doubt on the OPCW’s integrity in its investigation of the alleged Douma attack. ‘Alex’ provided WikiLeaks with materials including internal emails, text messages and suppressed draft reports, a study of which led journalists to conclude that the agency deliberately suppressed this information “to favour a preordained conclusion.”

Part of the memo written by an anonymous member of the OPCW fact-finding mission in Douma
© Photo : OPCW internal memo/WikiLeaks

The OPCW report on the leakers concluded that the “deliberate and premeditated breaches of confidentiality committed by Inspectors A and B” were “serious,” and recommended several “remedial measures” “to reduce the risk of future breaches of the OPCW’s confidentiality regime” in the future, including enhanced confidentiality training for staff, and a review of its internal legislation.

The allegation that the Syrian government was responsible for the alleged Douma chemical attack served as the justification used by the US and its British and French allies to initiate a series of airstrikes against the Arab Republic on April 14, 2018. The tripartite carried out the strikes just one week after the attack allegedly took place, before investigators could even begin their probe.