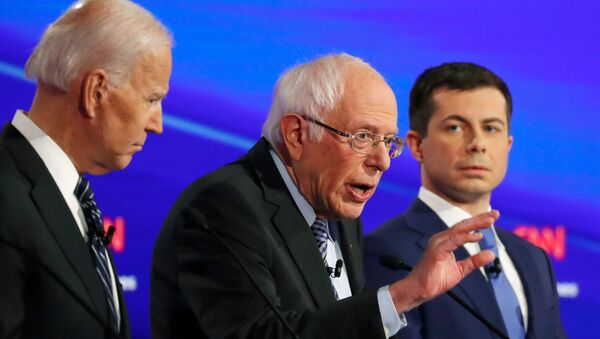 Democratic National Committee (DNC) chair Tom Perez received backlash over his Thursday announcement of the governing body’s decision to call for a “recanvassing” of the votes at the Iowa caucuses. While Perez argues the review will “ensure accuracy,” many social media users openly doubted the motivation behind the DNC’s decision.

Radio Sputnik’s Loud and Clear was joined on Thursday by Dan Kovalik, a human rights and labor lawyer who is the author of the book “No More War: How the West Violates International Law by Using 'Humanitarian' Intervention to Advance Economic and Strategic Interests,” who offered his thoughts on the DNC’s decision to recanvass in Iowa and argued why Senator Bernie Sanders’ (D-VT) momentum has been lessened as a result.

“They decided they could not defeat Bernie, and so they’re just going to throw the entire chess table and the pieces on the floor, because there’s no way to stop him now,” Kovalik told hosts Brian Becker and John Kiriakou. “The leaders of the DNC have not hidden their disdain for Bernie Sanders” and are now trying to “derail his momentum,” he added.

“Enough is enough,” Perez said on Twitter Thursday afternoon. “In light of the problems that have emerged in the implementation of the delegate selection plan and in order to assure public confidence in the results, I am calling on the Iowa Democratic Party to immediately begin a recanvass.”

A recanvass is a review of the worksheets from each caucus site to ensure accuracy.

The IDP will continue to report results.

The DNC chair’s tweet was immediately set upon by thousands of users who either called for Perez’s resignation, questioned the DNC’s motives or simply asked what a “recanvass” entails.

“This is only the first round!” Kovalik exclaimed. “There’s gonna be more dirty tricks we’re gonna see … it’s going to be an uphill battle for people like Bernie Sanders and not to even mention people like Rep. Tulsi Gabbard (D-HI) who’ve been written out long ago by both the party and the press.”

“First of all, where did this Pete Buttigieg come from? The guy’s a former mayor of South Bend, Indiana - that has about 100,000 people in it,” Kovalik said, adding that it’s “baffling” that he is surging at the moment.

“I do think the DNC has decided that [former Vice President Joe] Biden is damaged goods … I do think they’re putting all their bets at this point on Buttigieg, and, in fact, he is the one that has multiple billionaires supporting him. So I think he is the anointed DNC candidate, and he’s the one they’re going to promote at this moment,” he contended.

Kovalik expressed that while there may have been some level of incompetence concerning the Iowa caucuses, as the Democratic Party alleged, he finds it hard to believe that the delay in results was not a ploy to interfere with Sanders’ momentum on the campaign trail. Even if Sanders is declared the winner days after results were supposed to come in, the sought-after publicity will be dampened by the chaos surrounding the vote.

Then again, Sanders getting the most votes does not necessarily guarantee he will win the state.

“Even though Sanders has the highest popular vote, he probably won’t get the most delegates,” Kovalik noted.