Merkel And Pope to the Rescue: How Peronist President's EU Charm Offensive May Save Argentina 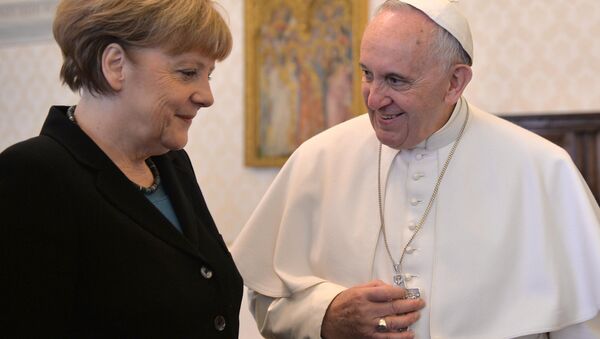 Ekaterina Blinova
All materialsWrite to the author
Argentina's Peronist government has launched a charm offensive in Europe aimed at convincing major EU states to support Buenos Aires during its upcoming debt negotiations with the IMF. According to Argentine political analyst Gonzalo Fiore Viani, Angela Merkel and Pope Francis could play crucial role in solving the country's debt crisis.

A summit with French President Emmanuel Macron on Wednesday in Paris marked the last leg of the European tour of Alberto Fernandez, the Peronist president of Argentina , who is seeking to restructure the country enormous debt and revive its economy. Macron vowed to stand by Buenos Aires and team up with the International Monetary Fund (IMF) and other partners to help Argentina to get back on the growth trajectory.

Previously, Fernandez held meetings with Pope Francis in the Vatican, Prime Minister Giuseppe Conte in Italy, Chancellor Angela Merkel in Germany as well as President Pedro Sánchez and King Philip VI in Spain ahead of debt renegotiations with the IMF.

Argentina's external debt amounts to $335 billion - which is over 90 percent of its gross domestic product - including $44 billion borrowed from the IMF. In addition to its 40 percent poverty rate the country is struggling with rapidly growing inflation which reached 53 percent in 2019. It is believed that if the IMF restructures the Argentine debt it would be easier for Fernandez to settle the dispute with other lenders.

'Fernandez & Merkel Have Known Each Other Since 2005'

"I believe there are strong chances that Alberto Fernandez can get the votes the Argentine government needs to renegotiate the debt with the IMF," says Gonzalo Fiore Viani, a lawyer and political analyst from Cordoba, Argentina.

"[Fernandez '] relationship with Angela Merkel appears to be a very good one, they've known each other since 2005 when Fernandez was Nestor Kirchner's chief of staff and in those days he was also trying to renegotiate another external debt with the IMF which was finally a successful negotiation for Argentina ", Viani recollects.

The political analyst believes that the Argentine government efforts "are going in the right direction", and that "with the support of Merkel and Macron, Argentina will avoid the worst case scenario which would be a default next March".

Argentina has yet another powerful ally - Pope Francis, a Buenos Aires-born cleric, who seems to be on the same page with Alberto Fernandez when it comes to solving the country most burning financial issue.

Last Friday, the pontiff and the Argentine president held a 45 minutes-long meeting in the pope's private library. According to Buenos Aires Times while welcoming Fernandez Pope Francis jokingly referred to him as his "altar boy".

"The pope will do what he can to help us with [the debt]", Fernandez told journalists after the meeting. "The pope is an Argentine concerned for his country and people."

"The pope, due to his international prestige and role as world leader, can help in a big way to Argentina," says Viani. "Today the country has a 'bad reputation' with other countries because of its really big debt that the previous government of Mauricio Macri took. The relations between the Fernandez government and the pope could not be better. They have the same vision about the big issues such as the role of capitalism in the less developed countries, more human security policies and the need to implement policies for those who are mostly left behind in our societies ".

According to the lawyer, the role of Pope Francis, a man linked to Joseph Stiglitz, who is Economy Minister Martin Guzman's mentor, is crucial to solving the debt problem.

Could Morales Become a Hurdle to Argentina's Debt Renegotiation?

Meanwhile, Argentina has faced criticism from La Paz for providing shelter to former Bolivian President Evo Morales toppled in November 2019 amid the political turmoil triggered by the country right-wing opposition over election results.

As Bolivia is bracing for new elections scheduled for 3 May, Morales, who is currently residing in Argentina, has stepped up his political activity . Though La Paz has issued an order to arrest him, the former president is considering running for the Bolivian Senate.

One might ask whether Fernandez 'support to Morales could become a hurdle for settling the debt issue with the IMF.

"I don't see Morales role in Argentina as a political exile from the Anez dictatorship, being a disadvantage for Fernandez's government", Viani suggests. "Until now, beyond just some public declarations, Morales being in Argentina doesn't seem to irritate the US or Europe. I don't see Fernandez government extraditing Morales for a request from the European Union or the US, his own electoral basis would never support such action because of everything Morales represents. "