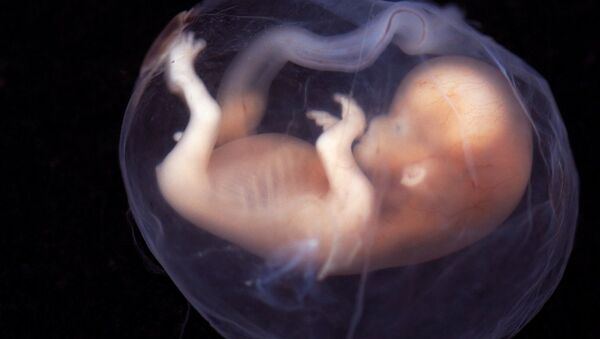 CC BY 2.0 / lunar caustic / Embryo week 9-10
Subscribe
New Delhi (Sputnik): In a rare case, a team of 15 doctors operated on a six-and-a-half month-old baby boy in India to remove something from his swelled stomach that they had assumed was a tumour. It wasn't.

At Patna Medical College and Hospital (PMCH) in the Indian state of Bihar, doctors removed a dead fetus from the abdomen of an infant named Irfan, media reported on Thursday.

This condition is what the doctors call “Fetus in Fetu” – a rare congenital anomaly, defined as when a twin zygote that gets trapped inside the abdomen of its sibling while in its mother’s womb.

According to the reports, the stomach, hands and head of the dead fetus removed from Irfan’s abdomen were developed, however, it had no heartbeat.

The 28-week-old baby boy was admitted to PMCH after his parents noticed a swelling that was visible on his stomach. At first, the reason for the swelling was suspected to be a tumour.

Dr. Amrendra Kumar and Dr. Nigam Prakash Narayan from PMCH revealed that this can be counted among the “rarest of the rare” cases and only happens once in over 500,000 children.

The first documented case of “Fetus in Fetu” was recorded in the year 1800.

In March 2017, a 10-month-old child underwent surgery to have his trapped dead twin removed from his abdomen in Indonesia.

The trapped fetus usually acts as a parasite to the surviving fetus and feeds off of blood while in the mother’s womb.

000000
Popular comments
That had to be a living hell for that fetus, actually child. Since it was an identical twin it was probably surviving off of the child's blood supply until they removed it. Six months old knowing only blackness and heat, discomfort.