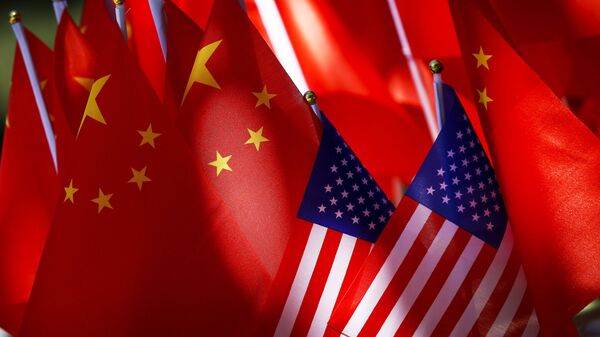 Oleg Burunov
All materialsWrite to the author
On 15 January, the US and China signed a Phase One Deal on a broader trade agreement in Washington, in what indicated a breakthrough in a trade war that had been simmering between the two major economies for nearly 18 months.

The Chinese Finance Ministry announced on Thursday that Beijing will slash tariffs on $75 billion in goods imported from the US in half.

The ministry said that the reduction is due to come into force on 14 February, and expressed hope for further cooperation with the US to finally lift all the tariffs in bilateral trade.

The ministry also expressed hope that Beijing and Washington would be able to fulfil their commitments under the recently-reached trade deal, boost market confidence, develop bilateral trade and economic relations as well as contribute to global economic growth.

The statement comes after the US and China signed the Phase One Trade deal on 15 January, which was seen as a much-hoped-for first step in ending the trade war between the two economic superpowers, which has led to billions of dollars in economic losses on each side, and caused a spike in concerns about the slowed global growth.

The deal stipulates China buying about $200 billion worth of US goods in four industries over the next two years.

Under the agreement, Beijing’s manufactured goods purchases should be the largest and will be worth about $75 billion.

Additionally, the agreement stipulates that China buy $50 billion worth of energy, $40 billion in agriculture products and $35 billion to $40 billion in services.

The signing of the deal marked a breakthrough in a trade war simmering between the two major economies for almost 18 months.

The trade war erupted in June 2018, when the US imposed the first round of tariffs on Chinese imports, prompting Beijing to respond in kind. Tariffs were slapped on tens of billions of dollars worth of Chinese goods, including clothes, toys, phones, and laptops. Also among those companies which have come under pressure was the Chinese tech giant Huawei. In mid-2019, Beijing and Washington began talks to try to end the trade spat.