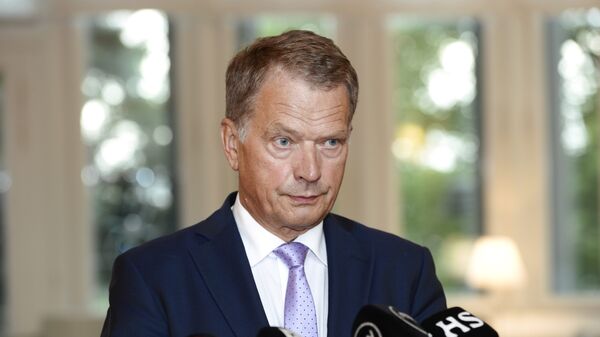 According to Finnish President, who addressed racism and anti-Semitism ahead of global threats such as terrorism, hate speech is a major problem in that it generates “a broad scale of emotions” in its targets, from shame to hatred.

Speaking at the formal re-opening of Finland's parliament, Finnish President Sauli Niinistö called for his nation to show resolve in combating rising racism and anti-Semitism.

Niinistö recalled the the 75th anniversary of the liberation of the Auschwitz-Birkenau concentration camp, which he attended, and noted that even though decades have passed, human nature has not become immune to hatred.

“There are signs of anti-Semitism and racism being on the rise, alas also in Finland. We must be resolute in challenging them. They do not deserve any foothold in our society,” the president declared.

While the Israeli Embassy claimed to have been vandalised on at least 15 occasions in the recent years, there are more recent examples, including the Turku Synagogue daubed with red paint on Holocaust Remembrance Day. Furthermore, the neo-Nazi organisation Towards Freedom held a demonstration in the city of Tampere, which culminated in torching the Israeli flag.

​According to Niinistö, racism involves denying the value of others because of their descent and noted that hate speech has very similar roots.

“Hate speech, too, generates a broad scale of emotions in its targets, from shame to hatred,” Niinistö pointed out.

Niinistö cautioned against the normalisation of name-calling. According to the Finnish president, labelling others is not something that should be done lightly. Everyone should be able to enjoy the same level of protection, including against labels, regardless of whether they belong to majority or minority groups.

“We need to consider what kind of a development makes people to accept, or at least turn a blind eye to, activities that they just a moment ago could not even have imagined,” Niinistö remarked. “The path appears to stem from confrontation, leading to gradually intensifying hatred and ultimately to the dissolution of humanity. As a result, an otherwise ordinary person may turn into someone who practices cruelty, first in words, then in deeds,” Niinistö concluded.

Niinistö addressed these issues first hand and only then went on to touch on global threats against the international community, such as nuclear weapons, terrorism, pandemics and climate change.

Parliamentary Speaker and former Prime Minister Matti Vanhanen of the Centre Party, snatched at the president's speech and drew attention to the escalation of the public discourse, including with respect to parliament.

“The new parliamentary term is starting in a situation where several political actors are the subject of legal scrutiny, either because of their role or otherwise due to their words or actions in society”, Vanhanen stressed.

As of today, three Finnish MPs are under scrutiny for statements that have been deemed controversial, including Finns Party lawmaker Juha Mäenpää, who compared asylum speakers to an “invasive species”, Christian Democrat Päivi Räsänen, who questioned the Church's participation in a Pride event she claimed to portray sin and shame, and Social Democat Hussein al-Taee who made a series of disparaging remarks about religious and sexual minorities.

According to the estimates of Hebrew University demographer Sergio DellaPergola’s “World Jewish Population, 2016" cited by the World Jewish Congress web site, Finland is home to between 1,300 and 1,900 Jews, who despite their limited numbers, are prominent in a number of high offices of state.