Sudanese Split Over Support for Israel, but Sudan Can Juggle Between Both, Claims Journo 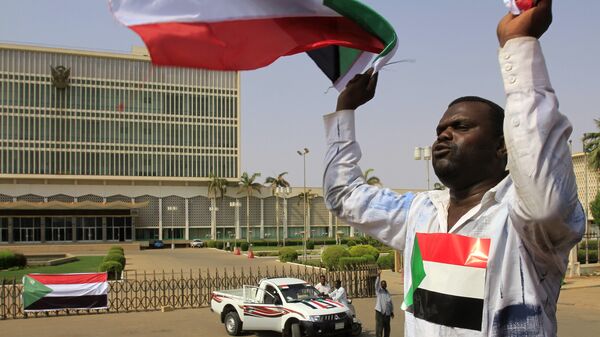 © AFP 2021 / ASHRAF SHAZLY
Subscribe
Sudan's public is split over its president's meeting with Israel's PM and the possibility that the African country would recognise the Jewish state, says a Khartoum-based journalist. While some have embraced the move, others believe it would only bolster the country's military, something that could eventually jeopardise Sudan's path to democracy.

Iran's Foreign Minister Mohammed Javad Zarif called Palestinian President Mahmoud Abbas on Tuesday to reiterate Tehran's opposition to the US "deal of the century" plan that attempted to resolve the Israeli-Palestinian conflict.

But his phone call was also aimed at showing support for the Palestinian leader, who "was deeply hurt and shocked" by the meeting held in Uganda between Israel's Prime Minister Benjamin Netanyahu and the Sudanese interim President Abdel Fattah Al Burhan, Palestinian sources said.

Under its former leader, Omar Al Bashir, who ruled the country for three decades, Sudan had been a vocal supporter of Palestinian rights and a staunch enemy of Israel, boycotting the Jewish state ever since the African country's establishment in 1956.

Now that Bashir is gone, that situation seems to be changing, with reports suggesting that the new leader is laying the groundwork for the establishment of ties with Israel, with which it has never had any diplomatic relations.

Split in the ranks

The only problem is that the Sudanese government knew little or nothing at all about the meeting between the Israeli PM and the Sudanese President.

"It is such a sensitive and strategically important subject but it was completely hidden from the ministers' eyes. The move was undemocratic and it lacked transparency. Now the leader will need to provide some explanations," said Mohammed Amin, a Khartoum-based journalist specialising in the geopolitics of Sudan and the region.

General Burhan, who seized power in 2019 after ousting Bashir from office and establishing an interim government comprised of military and civilian components, seems to be interested in getting closer to Israel "hoping Tel Aviv would bridge between his country and the West," says Amin.

Sudan is one of the world's poorest countries, with 40 percent of its population living below poverty line, and needs Western donations to escape the dire economic situation it is currently in, something that didn't improve after Washington lifted its sanctions on the African country in 2017, with Khartoum vowing to combat terrorism and address pressing human rights issues.

Israel as the bone of contention

But apart from splitting the government, the high-profile meeting in Uganda has also divided the Sudanese public, says Amin, suggesting that while some elements in the society believed it was time for Sudan to start pursuing its own interests, others voiced a concern that the move that bolstered the military camp within the interim government could potentially lead to the militarisation of the country and the return of the previous regime.

And there is a religious component too. According to a 2010 survey conducted by Gallup, 97 percent of Sudanese considered themselves religiousb with Islam playing an important role in their lives.

"Religious elements in the society will not want to be associated with Israel as they are loyal to the Palestinians. However, I believe that the establishment of ties with the Jewish state will not necessarily mean that Sudan would drop its support for the Palestinian cause," said Amin.

This didn't stop other Muslim nations, including Egypt and Jordan (which have a peace agreement with Israel) from cooperating with the Jewish state, despite their staunch backing of the Palestinians.

"Even the PA has its own agreements with Israel. They themselves negotiate and cooperate with the Jewish state," said Amin, suggesting Sudan could follow a similar path.

And he is not worried about how Arab or other African nations that don't have diplomatic relations with Israel would view Sudan's new approach.

"Reports suggest that the meeting in Uganda was set up by several Arab countries including the UAE and Egypt. As for other African states... they might follow in the footsteps of Sudan and Chad, which restored its diplomatic relations with Israel a year ago, so pretty soon we might see a big breakthrough for Israel in Africa."