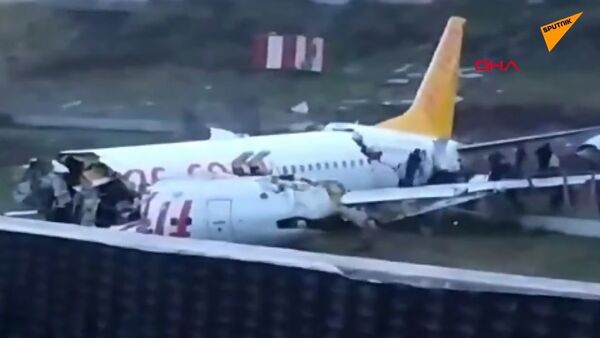 The airport has been temporarily closed due to the incident. Ambulance crews and police are working on the scene.

A passenger Boeing 737-800 plane has skidded off the runway at Istanbul's Sabiha Gokcen Airport, CNN Turk reported. The Pegasus Airlines plane suffered damage to the fuselage which broke into pieces and caught fire. The fire on the plane was extinguished by firefighters.

It’s the second time in a month that a passenger plane of the same company skids off the runway in #Istanbul Sabiha Gokcen Airport.

The last one was on Jan. 7, which resulted in no casualties pic.twitter.com/DxjBeXoNga

​All passengers have been evacuated from the aircraft, according to the Daily Sabah. According to Turkey's transport minister, there are no fatalities in the incident. NTV quoted the minister as saying that the aircraft broke after a "hard landing" amid strong winds and rain.

According to Turkish authorities, fifty-two people were taken to hospital after they were evacuated from the plane.

Meanwhile, the Governor of Istanbul Ali Yerlikaya has said that the Turkish aircraft was forced to make a hard landing due to poor weather conditions, adding that 120 people were injured in the incident.

​There were 177 passengers on board the plane, including 6 crew members.

All inbound flights are being redirected to Istanbul's Atatürk Airport.