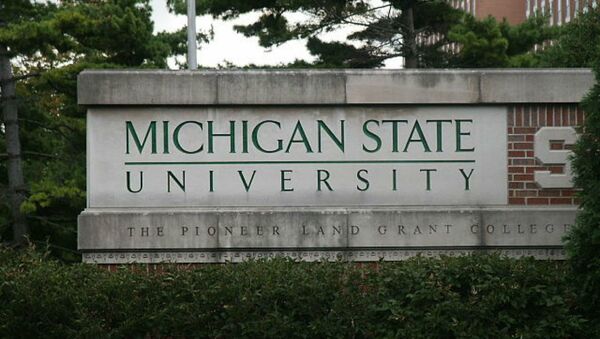 Krystal Davis-Dunn, a student at the university, snapped the images and uploaded them onto Facebook. “At the Wharton Center gift shop they are hanging prominent black figures from trees. #MSU what a way to honor Black History!” reads the post.

“Seeing these prominent civil rights leaders hanging from trees felt like a degradation of the women suffrage movement and white synthesizers that were lynched during that era of civil rights,” she wrote in a follow-up Facebook post.

“Non-people of color may not be provoked or triggered by these displays, but for me and the group of people of color I was with ... it was a visceral experience.”

Speaking to local news station WLNS, the student emphasized to the outlet that the gift shop’s display was “insensitive for the fact of the historical context; it’s, ya know, the lynching of African Americans. It’s a fear tactic.”

“Something has to happen now. … I don’t know what that is, but there has to be someone paying attention, someone capable of making changes and addressing these things that are happening now,” she added.

Amid the outrage, the display was quickly removed, and the university has since issued a statement on the matter, saying that both employees and volunteers at the shop would be undergoing “racial bias training that focuses on the impact and understanding of intentional and unintentional racial bias.”

In a statement to NBC News, university spokesperson Emily Gerkin Guerrant told the outlet that the school is still in search of a chief diversity officer, and that the institution does “recognize that we have more work to do to make MSU an inclusive and safe campus.”

This incident is just the latest of several racially-charged developments that have unfolded on campus. According to the Lansing State Journal, in October 2019 two black students found a noose made from toilet paper on their dorm room door, and in the same month, a survey handed out by a professor was pulled from an MSU website for being highly insensitive.