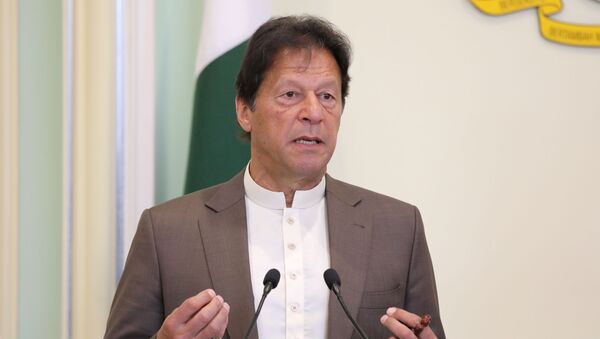 New Delhi (Sputnik): The Paris-based anti-terror funding watchdog FATF placed Pakistan on its “Grey List” in June 2018. Pakistan has been facing the risk of being placed on the money laundering watchdog's blacklist along with Iran and North Korea in the upcoming meeting later this year.

Malaysia has extended strong support to Pakistan ahead of a crucial meeting of the Financial Action Task Force (FATF), which was established to combat the financing of terrorism.

In a joint statement issued after a crucial visit of Pakistan Prime Minister Imran Khan to Kuala Lumpur, Malaysia's government announced that they appreciated the action undertaken by Pakistan to curb terrorism in the country.

“The Prime Minister of Malaysia acknowledged the extensive counter-terrorism efforts by Pakistan and progress it continues to make in complying with the recommendations of the Financial Action Task Force (FATF),” the statement reads.

Pakistan has been lobbying hard for last few months and expects the country to be taken off the FATF grey list, as major powers including the US, UK, France, Germany, and even Japan appear to be in favour of Islamabad during review meeting held between 21-23 January in Beijing.

Pakistan currently has the support of three countries – Malaysia, Turkey, and China. But it needs the votes of 12 more FATF member nations to shift from the "Grey List" to the "White List". The FATF counts 39 countries among its members.

Prime Minister Khan also appreciated the “constructive role that Malaysia has been playing to assist Pakistan” in its efforts to improve and continuously taking active steps in further developing its anti-money laundering and terrorism financing ecosystem.

Islamabad has been repeatedly accused by New Delhi and some other FATF member states of not taking action against UN-designated terrorists, while Imran Khan's Government has blamed the Narendra Modi government for politicising the platform. These member nations have also said that Pakistan's anti-terror laws are still out of sync with globally-accepted standards.

Pakistan's Prime Minister Khan and his Malaysian counterpart Mahathir Mohamad witnessed the signing of an extradition treaty which aimed to further reinforce and add substance to the Strategic Partnership between the two countries.

Malaysia and Pakistan, which is observing Kashmir solidarity day on Wednesday, once again reiterated that the situation in Jammu and Kashmir issue should be resolved on the basis of the relevant United Nations Security Council (UNSC) and General Assembly (UNGA) resolutions, as well as the UN Charter and the international human rights and humanitarian law.

The Indian government had already issued a strong statement and accused Malaysia of interfering in country’s internal affairs while making a comment on Kashmir.