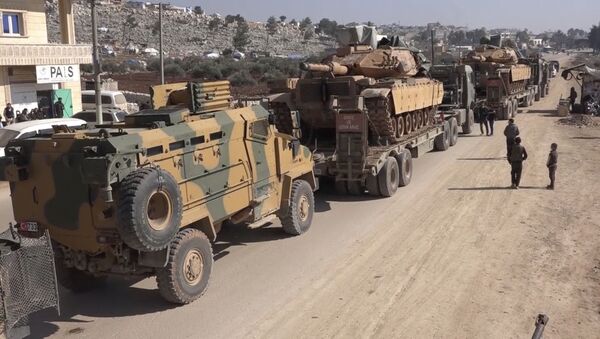 © AP Photo / APTN
Subscribe
On Monday, Turkey’s President Recep Tayyip Erdogan described the current developments in the Syrian province of Idlib as "unmanageable", adding that about one million refugees from the province have started moving north, towards the Turkish border.

Turkish President Recep Tayyip Erdogan said on Wednesday that agreements related to Syria’s Idlib and the East of the Euphrates do not work.

He warned that Turkey will respond to the Syrian Army's possible failure to withdraw its troops behind the line of Turkish observation post by the end of this month.

“At the moment, two of our 12 observation posts are behind the regime's lines. We hope the regime will withdraw from our observation posts before the end of the month of February. If the regime does not pull back, Turkey will be obliged to take matters into its own hands,” Erdogan warned.

Erdogan added that his recent phone call with Russian President Vladimir Putin had been constructive, and that they had agreed that the military forces of Russia and Turkey would remain in contact.

The statement comes after Putin and Erdogan spoke via telephone on Tuesday to discuss the recent attack on the Turkish military in Idlib province, as well as the situation in Libya and bilateral relations.

"The president stressed that Turkey will continue using its right to protect itself from such attacks, in the toughest manner," the Turkish presidential administration said in a statement.

This was preceded by Erdogan calling the current developments in Syria’s Idlib province "unmanageable" on Monday.

He said that around one million refugees from the province had begun moving towards the Turkish border with the Arab Republic, claiming that this was the result of Damascus' offensive in Idlib. He added that it would be difficult for Turkey to receive so many refugees.

In a separate development on Tuesday, the General Staff of the Syrian Army said that it has offered the militants operating in Idlib one last chance to lay down their arms, and that the Syrian forces were ready to repel any Turkish aggression in the province.

“Our armed forces are trying to give the last chance to the militants and save the lives of the besieged civilians. The army units operating in the region have been ordered to allow those who decide not to rely on the support of the Turkish forces to surrender their weapons," Ikhbariya news agency cited an unnamed military source as saying.

The statement followed the Turkish Defence Ministry stating on Monday that six Turkish servicemen had been killed in an attack by the Syrian Army in Idlib.

The Turkish military presence in Syria has neither been sanctioned by Damascus nor the UN Security Council. Turkey insists that its forces had been deployed in the region in order to prevent conflicts in Idlib, where fighting escalated recently as the Syrian government has been struggling to recapture control over the area.

A large portion of the Idlib de-escalation zone, which was one of four safe zones established under an agreement reached at the May 2017 Astana-format talks, is still controlled by the terrorist group Hayat Tahrir al-Sham*. Russian President Vladimir Putin and his Turkish counterpart Recep Tayyip Erdogan signed a military memorandum in the Russian city of Sochi in October that created an 18-mile safe zone on the Syria-Turkish border and enforced regular military police patrols to facilitate the withdrawal of Kurdish fighters from elsewhere in northern Syria.

In September 2018, Moscow and Ankara agreed to set up a demilitarised zone along the contact line between the armed opposition and Syrian government forces in Idlib. Some militants, however, have refused to lay down arms, with the province remaining a stronghold of various terrorist groups.