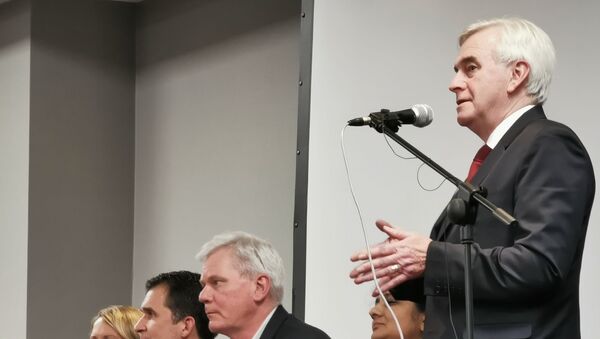 Demond Cureton
All materialsWrite to the author
Nearly 1,000 attendees gathered in London to show support for the Wikileaks founder on Tuesday evening, just weeks before the detained activist is set to begin attending two crucial court hearings ahead of a final extradition request ruling later this year.

Members of the panel spoke out against the whistleblower's arbitrary detention at Belmarsh Prison, where the activist could receive up to 175 years in a US federal prison following an extradition request from Washington.

The following are highlights from speeches delivered at the rally.

Discussing the future of journalism amid the ongoing Assange case, which could set dangerous precedents for future journalists:

"We're dealing with political corruption [and] persecution. This has nothing to do with justice. But we need to fight and tear down this wall around Julian and free him.

I remember shortly after he was arrested, we asked him what to relay to the journalists outside. He replied: "Tell them, it's not about me, it's about them!" 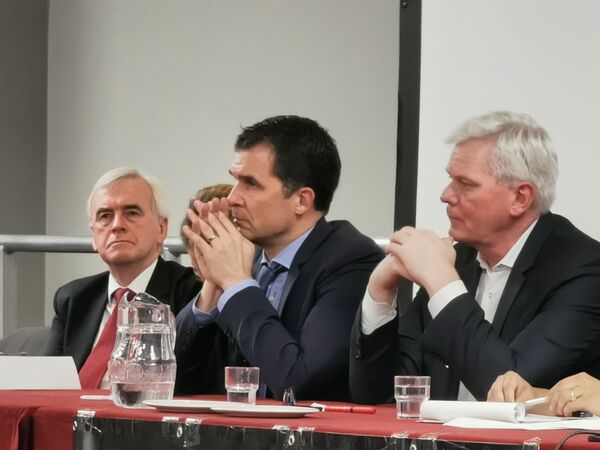 (Left to right) UK shadow chancellor, John McDonnell, UN special rapporteur on torture, Nils Melzer and Wikileaks editor-in-chief, Kristinn Hrafnsson
© Sputnik / Demond Cureton
It's about the future of journalism. It's the gravest attack on journalism in my lifetime and a serious attack on journalism in latter times. If this extradition goes ahead, we will enter into a new Dark Age. We have to fight and work together, everywhere.

Speaking on the impetus to defend Julian Assange's work, which has led Wikileaks to international acclaim:

"I always think it's important to remember what these publications were and their significance. The publications for which he now sits in a high-security prison, over in Belmarsh.

Cablegate, diplomatic cables which revealed the true nature of US imperialism. The fact that the United States was ordering the spying on UN diplomats. Corruption, torture, human rights abuses the world over. 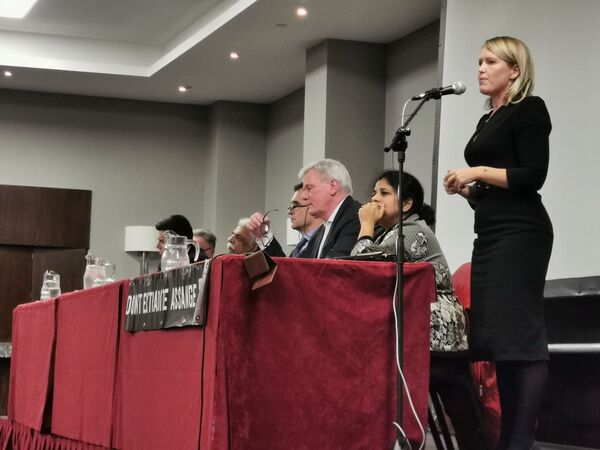 Barrister Jennifer Robinson discusses implications of Wikileaks revelations at rally in London
© Sputnik / Demond Cureton
These are the publications for which he sits in prison. This is the very same material for which WikiLeaks and its media partners have been recognised the world over with journalism awards.

For that reason, we've been saying for years that the media needed to stand with WikiLeaks to defend against the precedent being set, because it would have a chilling impact on investigative journalism the world over."

Speaking in metaphor on the focus of the media narrative surrounding Julian Assange and the significance of his work with Wikileaks:

"Julian Assange has taken the flashlight in that dark room and pointed it at the elephant. The elphant of war crimes, of misconduct, under the colour of law [...] of serious violations of human rights.

But despite his spotlight, the elephant, as a deer in the headlights, was frozen for a couple of moments, and for a couple of weeks, everyone was discussing these revelations.

But then the elephant snatched the spotlight, turned it over, and pointed it at Julian Assange. The room became dark, and the only thing we could see was Julian in the corner with the spotlight on him.

And now everyone discussed his character, his private habits, does he wear shorts or long pants during his video conferences, was he skateboarding at the embassy, what was he feeding his cat, was he smearing things on the embassy walls... absolutely trivial things compared to the revelations he made.

Who has the spotlight? It's certainly the governments and the media. The media are supposed to serve and inform us to empower us, not just to entertain us.

We won't look at the elephant in the dark. And this is what this is all about."

Speaking on the role of the Conservative UK government, which signed off on the US request to extradite Julian Assange to Washington:

"Just imagine how poorer our understanding of the barbarity of the Vietnam War would have been had those who exposed US atrocities had been subjected to prosecution for doing so.

Are we really going to hand over someone to spend 175 years - the rest of their life - in prison for exposing killings and abuses in Iraq and Afghanistan, including the killing of journalists?

It's wrong that the Conservative government signed the extradition warrant to the United States. It not only appears as yet another example of kowtowing to US foreign policy, but it seems to me to be a complete failure to respect the basic principles of journalistic freedoms.

This issue goes way beyond the case of Wikileaks. It's a clear attack on all of those who wish to expose abuses of state power, and an attack on journalists who report on them."

Discussing the need to protect journalists and whistleblowers exposing government crimes and corruption:

"The reason why I'm here is in an act of solidarity. I'm a member of parliament, and the role of an MP is to supposedly stand up for democracy and democratic rights of individuals, as well as protect the rights of those democracies from threats, wherever those threats come. 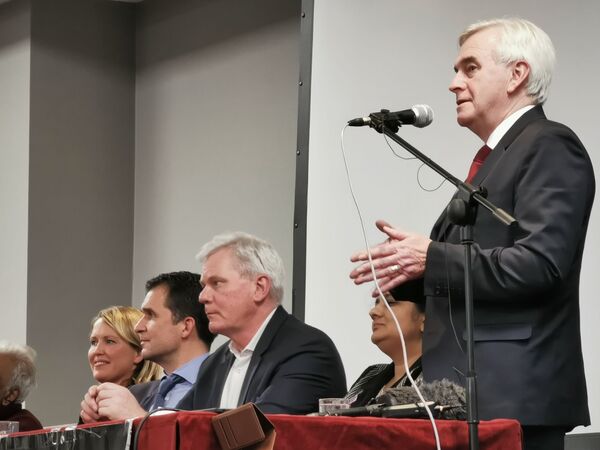 UK shadow chancellor John McDonnell speaks at a Wikileaks rally in London
© Sputnik / Demond Cureton
When this case came along and WikiLeaks happened, it seemed like a classic case of whistleblowing to expose wrongdoing, which was brutal, illegal, grotesque and something which many of us suspected was happening, but just couldn't get the proof of that brutality, the torture and murders from that point on.

So, it's a huge breakthrough, and the State in its usual role try to close down access to individuals like us and civil society towards that truth, and that's what this is about. It's about the individual, Julian Assange, but it's also the principle and the protection of democracy, but also the throw a light on the iniquity perpetrated in our name."

Urging attendees to campain for Wikileaks, Julian Assange, and the strength of such campaigns in successfully freeing the Australian publisher:

"The one thing that has improved Julian Assange's conditions in Belmarsh, which got him out of solitary confinement, was campaigning.

There was campaigning from ordinary activists and the legal team, but most impressively, it was three petitions by Belmarsh prisoners themselves demanding that his circumstances be changed because they were unjust and unfair. If they can do it, in the most difficult circumstances imaginable, you and I with much greater freedom can do it as well.

This legal process is corrupt. [Assange] will never be in front of a jury in this country. He will only be tried by a judge, and when he gets to the United States, he will only be in front of a jury who are to be selected locally in Alexandria, Virginia, where 80 percent of jurors are employees of the Pentagon, the National Security Agency or the Central Intelligence Agency. He will go to no jury to to bent jury, and you will never hear that voice again."

Tariq Ali, Member of the Editorial Committee of the New Left Review, Activist, and Journalist

Detailling the information in the Wikileaks revelations, including major war crimes from the US and UK as well as the need for states to silence dissenters:

"Why, if we know the scale of massacres that took place? We know what happened in Fallujah in Iraq, when they were shooting wounded Iraqi prisoners in the head, saying "that's what you do to dying animals", according to a NYT report.

No prosecutions at all by any international body. Why? Because they're supposedly our wars, and our wars are good wars, and killing the enemy is part of our patriotic duty.

In any system which was genuinely impartial... I mean, why wouldn't Bush, Cheney and Blair an international court?

This is the context to understand what is happening to WikiLeaks, to Julian Assange, and why they're so determined to crush dissent. It's not simply Wikileaks, but other journalists are under fire. "Don't do it again", they say.