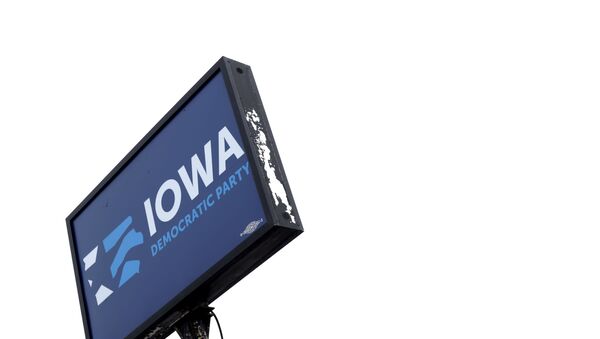 On Monday night, the US presidential nomination process kicked off with the caucuses in the state of Iowa. The voting results for the Democratic contenders were expected to be released by 11:00 p.m., but party officials said they could not release them because of a computer application bug that may influence the accuracy of the tallies.

Michael Springmann, attorney, author and former diplomat from Washington DC, believes that the app mishap could have been a set-up to get rid of Bernie Sanders.

Sputnik: It was reported that the smartphone app that caused the chaos and mishap during the Iowa caucus is to be used in Nevada. Do you think it will be possible to resolve this before the vote goes to Nevada?

Michael Springmann: They can't possibly do that. They don't, in fact, know what's wrong with this app that the Democratic Party came up with from a company that was tied to the Clinton campaign and also has some kind of shadowy connections with the Bush campaign as well. And in fact, I've seen news reports in the last day or so that said Nevada has stated it will not use that app and that they will not do anything other than the traditional way of doing a caucus in the state. Certainly, Iowa's a very simple operation. You had people stand in a group supporting whatever candidate they chose and other people said in another group and they simply counted heads and reported them. Granted, there was some back and forth about who had enough votes and who was working to add votes from uncommitted people and so forth. It was kind of like a game of musical chairs at some points by way of doing things. And this app complicated the matter. To no end and no one knows why. And when they tried to report directly by counting heads, they couldn't get through to the Democratic headquarters in the state. So I think the whole thing is very, very peculiar.

Sputnik: Dan Callahan, chairman of Iowa’s Buchanan County Democratic Committee, warned the app was not ready to be used in the first place: “They only put the new app out a month ago — just four weeks ago —and we had issues from Day One”, he said. Knowing this, why did the Democrats use this app?

Michael Springmann: Well, last night I talked with a journalist who follows domestic politics very closely, and he is also a committed Democrat. And his explanation was: 'Oh, it was a something with bugs'. And he's worked with campaigns in the past and he's involved in politics and ran things for a company. And he said these things happen. And I don't think so. I think that it was not tested, not a tried operation. And I think if you want my personal opinion, it was set up to get rid of Bernie Sanders, that he is the gadfly to the Democratic Party. The Democratic Party, which is still controlled by the Clinton family, hates Sanders. Hillary Clinton has come out recently with various attacks on Sanders, saying he's unelectable and so forth. And I think by monkeying with the results, by taking days to release only partial results, I think they've done what they've expected to do and planned to do, which was simply to make sure that Sanders would not be the overall winner in Iowa. He was eclipsed marginally by this Buttigieg guy, who was mayor of South Bend, Indiana, known in the past only for being the location of the Notre Dame University football team. I think that the whole spread is useless and they have an unelectable Buttigieg leader, Sanders, who is slightly behind him, and then you had Elizabeth Warren, who is pretty much unelectable. And then in fourth place, you had Joseph Biden, who had been vice-president for eight years. And people are getting more and more to see that he is unelectable, that he has problems.

Sputnik: The Iowa Democratic Party paid about $63,000 in November and December to Shadow Inc. for the mobile software that was supposed to help party officials quickly tabulate results from nearly 1,700 caucus sites on Monday night. But the caucus failed. How may this impact the image of the Democratic party?

Michael Springmann: I certainly think so. I think it's certainly an influence for the negative. I mean, they can't run a caucus, as Trump has said, so how can they run the country? It was remarkable for what they did and what they didn't do and how they'd abandoned a tried and true recipe for something out of the blue, that can be easily manipulated by whoever put this app together. And from what I've seen, people who tried working with the app had a terrible time with it. So the Democrats, I think, failed miserably in putting another good caucus in and trying to pick the best candidates simply because of this app. And then worse, they came up with all sorts of really strange explanations for it. And at the same time, taking several days to produce partial lists of winners. So we have people like Buttigieg saying: 'Oh, I am the winner', just like this guy Guaido said: 'I'm the president of Venezuela', with no support whatsoever. He just simply picked the statement out of the air. So the Democrats have come across very, very badly.

Sputnik: Should the Nevada Democratic Party, in your view, seek to recoup the $58,000 that the Federal Election Commission records show it paid Shadow Inc.?

Michael Springmann: Yeah, they certainly would. I mean, this is a lot of money. Oh, the Shadow Inc. obviously didn't know what it was doing. Or maybe he didn't know what it was doing. And in creating a non-working app to count heads when you do it. One, two, three, four, and write it down on a sheet of paper without any major problems. And they've had no problems like this until they've introduced this app. So, yeah, I mean, it's, you know, 58,000 dollars that could be put to better use and I sure they would want it back.