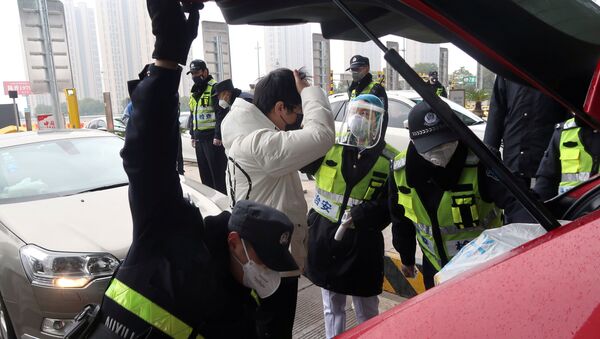 © REUTERS / Martin Pollard
Subscribe
Ekaterina Blinova
All materialsWrite to the author
The Wuhan coronavirus (nCoV2019) has claimed 426 lives in China with the total number of confirmed cases climbing to over 20,400. Beijing-based author Thomas W. Pauken II explains how the Chinese have adapted themselves to their new conditions with media apps helping them to track the spread of the virus.

Amid the media fuss surrounding the nCoV2019 outbreak China's Foreign Ministry highlighted Tuesday that the mortality rate of the novel coronavirus stands at 2.1%, which is much lower than the 17.4% for the 2009 H1N1 influenza outbreak or the 34.4% rate for Middle East respiratory syndrome (MERS).

The nCoV2019 was first identified in Wuhan, the capital of China's Hubei province, in December 2019. Since then, the novel virus has spread to 23 countries with 153 confirmed cases worldwide. Having declared the coronavirus outbreak a "global public health emergency", the World Health Organisation (WHO) specified that the virus is quite stable and world is currently "not in a pandemic".

'Beijing Has Turned Into Ghost Town'

Thomas W. Pauken II, a Beijing-based author and political commentator on Asia-Pacific issues, says that the Chinese government is taking every effort to contain the virus spread.

"Beijing and all over China, there’s a partial lockdown in effect", he reports. "Residents are advised to stay home, while only shops selling food, medicine and basic necessities remain open. To walk outside you must wear a face mask to pass by public security gates stationed at all apartment complexes. You are required to have your temperature taken. Beijing has turned into a ghost town with empty streets. Metro bus and subway lines are still running but with very few passengers. Most shops, warehouses and factories are closed down".

According to him, people are staying calm in the capital city and there's no widespread outrage about the quarantine measures since that ensures public safety.

He emphasises that the Chinese media have been reporting accurately on the outbreak.

"You can find out about the latest Coronavirus updates in the Chinese language media and apps", the commentator explains. "A new popular trend is WeChat groups in which members share the latest news updates and talk about how they are adapting to the ‘new normal’ in their lives. Chinese language apps provide real-time alerts, maps to track where all confirmed cases are reporting and you can sign up for a tracker that informs you who is a coronavirus patient that lives closest to your home. Medical staff has issued tips to the public about taking precautions to avoid catching the coronavirus". 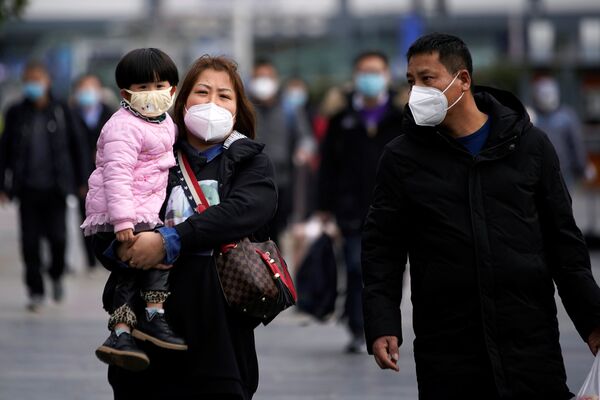 Passengers wearing masks walk outside the Shanghai railway station in Shanghai, China, as the country is hit by an outbreak of a new coronavirus, February 2, 2020.
© REUTERS / ALY SONG

Wuhan: Situation is Under Control

Pauken highlights that the situation in Wuhan remains under control. On 23 January, the Chinese authorities put the city under quarantine, shutting down its public transport with all flights and passenger train passages out of Wuhan being halted.

"Wuhan [residents] are required to stay home and must receive special permission to go outside to buy food and other necessities", he elaborates. "Hence, they must have security guards take their temperatures and if they have a high fever they are told to return home or taken to hospital for further observations. Such requirements are not easy, but Wuhan residents… understand the government’s actions and hold no grudges against it. There’s no real panic".

The author draws attention to the fact that the construction of a new 1,600 bed medical facility in only 10 days duration has been completed last Sunday in Wuhan: "They showed the site as a live stream event on Chinese Social Media Apps with over 30 million viewers cheering on construction workers in real-time", he notes.

Pauken emphasises the role of China’s People’s Liberation Army that "has been well-trained and organised to handle nationwide emergencies, so many of them have been deployed to serve in medical aid units and to transport food, medicine supplies and goods to Wuhan and other hard hit areas in Hubei Province".

'US' Response to Coronavirus is a Huge Disappointment'

While the People's Republic of China is going through a tough time certain countries do not show willingness to stretch a helping hand to the Chinese, the Beijing-based commentator notes.

"When there are major natural disasters or deadly outbreaks, it’s expected for politics to take a backseat to immediate recovery efforts", Pauken says. "But you don’t see that with the Western media in regards to the coronavirus. They continue on with their anti-China messaging, denouncing Beijing’s actions".

He refers to Secretary of State Mike Pompeo's 30 January statement that "the Chinese Communist Party presents the central threat of our times" to Western values. The same day Commerce Secretary Wilbur Ross went even so far as to suggest that the nCoV2019 outbreak "will help to accelerate the return of jobs to North America".

"Washington’s response to the coronavirus has been a huge disappointment", Pauken, who is an American citizen, remarks. "For such a long time, the US has often risen above to help foreign countries when there is an international crisis. You would expect US officials and celebrities to make positive statements to show support for China amid the outbreak, but there’s silence. There are no calls for donations either. No pledges to help or volunteer".

On 2 February, the US began implementing new travel restrictions which includes temporarily suspending entry to foreigners who visited the People's Republic in the two weeks prior to their arrival to the US.

"We reiterate our call to all countries not to impose restrictions that unnecessarily interfere with international travel and trade.

Such restrictions can have the effect of increasing fear and stigma, with little public health benefit"-@DrTedros #2019nCoV #EB146

​In response, China's Foreign Ministry condemned Washington's border closure, stressing that "US comments and actions are neither based on facts, nor helpful at this particular time". According to Chinese foreign ministry spokeswoman Hua Chunying, Washington actions "unceasingly manufactured and spread panic".

Thomas W. Pauken II is the author of "US vs. China: From Trade War to Reciprocal Deal".