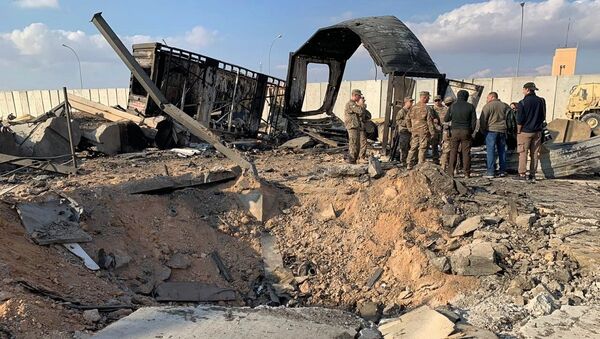 © AP Photo / Ali Abdul Hassan
Subscribe
A growing number of US troops diagnosed with varying degrees of brain trauma from the January 8 missiles strikes conducted by the Islamic Revolutionary Guard Corps (IRGC) are eligible for the Purple Heart service award, according to the Department of Defense.

Speaking to reporters during a recent news briefing, Jonathan Hoffman, assistant to the secretary of defense for public affairs, referenced the criteria for service members to be awarded the military’s Purple Heart medal - which recognizes who have been injured or killed in the line of duty.

The Pentagon spokesman explained that in the case of traumatic brain injury (TBI), a service member must be both diagnosed by a medical professional and miss at least two days of duty in connection with the injury, according to Military.com.

Hoffman went on to note that many of the dozens of US troops injured in the IRGC strikes on Ayn al-Asad airbase in Western Iraq would be eligible for the award, but the injured individuals’ respective services would ultimately decide if the Purple Heart will be awarded.

"The process is going to play out," Hoffman said. "Fortunately, all the cases to date have been characterized as mild TBI, which is the equivalent of concussions."

He went on to say that approximately 60% of those injured in the January 8 strikes "have already returned to duty … and we're optimistic that the rest of them will return to duty very soon.”

Furthermore, the Purple Heart is given out in the name of the US president. While in Davos, Switzerland, for the World Economic Forum, US President Donald Trump made light of TBIs, saying that he doesn’t “consider them very serious injuries relative to other injuries,” as he has “seen people with no legs and no arms,” as reported by The Guardian. The commander-in-chief also said that he didn’t believe that the reported “headaches and a couple of other things” were very serious.

The Pentagon spokesman previously noted during a briefing late last month that many of the symptoms experienced by the injured troops were "headaches, dizziness, sensitivity to light, restlessness [and] nausea.”

Hoffman’s announcement regarding Purple Heart qualification comes days after the Pentagon revealed that the number of US troops diagnosed with TBI from the Iranian strikes had risen from 50 to 64.

IRGC Brigadier General Ramezan Sharif argued in an Iranian newspaper on Saturday that the US is using “brain injuries from the attack on Ayn al-Asad to be a metaphor for dead US troops” because they are hesitant to formally announce a death toll from the Iranian operation.

Muhammad-Aryan
4 February 2020, 23:15 GMT9
000000
They wouldn't have these injuries, if they weren't fighting half across the world in a foreign country that doesn't want them there.