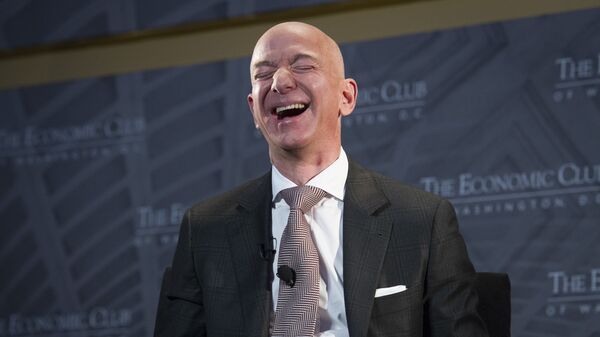 In the tech giant’s quest to find a new host city for its second headquarters, Amazon executives referred to the aggressive effort in internal memos as “F**k you, We’re Amazon,” according to a Tuesday report by Bloomberg. A company insider also told the outlet it was “an ego exercise that blew up in Jeff Bezos’s face.”

For two years, Amazon pitted US cities against one another in a race to award the tech giant with the most tax incentives, cash handouts and other perks in order to win the massive economic benefits of hosting the tech giant’s new headquarters, dubbed HQ2. This aggressive strategy was glibly summarized by company insiders as “F**k you, We’re Amazon,” Bloomberg reported on Tuesday.

The benefits of winning HQ2 promised to be massive for any city willing to bend far enough over to satisfy Amazon and its CEO, Jeff Bezos, the world’s richest man. The company boasted it would bring $5 billion in investment and 50,000 tech jobs to its new home. Inspired by concessions won by other high-tech employers like Boeing and Tesla - the latter of which is owned by Elon Musk, who is in close competition with Bezos for clout among the country’s billionaire oligarchy - Bezos set out to extract the maximum concession possible.

For a while, it looked like New York City would share the site of HQ2, along with its benefits, with Arlington, Virginia: New York City Mayor Bill de Blasio and New York Governor Andrew Cuomo promised an astonishing $3 billion in incentives to win the Long Island City, Queens, location, and another $762 million was extracted from desperate Virginia politicians. However, amid extensive pressure from resistant city residents outraged at the corporate largesse and fearful of the impacts it would have on already-exorbitant rental rates, Amazon was forced to cancel the New York plan in February 2019.

However, the concessions from New York and Virginia were dwarfed by others Bezos rejected, including $7 billion by New Jersey and $5.84 billion by Maryland.

“This entire thing was an ego exercise that blew up in Jeff Bezos’s face,” one person familiar with Amazon’s effort told Bloomberg.

“Bezos’s frustration with what he deemed meager government largess prompted executives to scrap lessons learned through the years in favor of an unapologetic appeal for tax breaks and other incentives,” Bloomberg reported. “Employees with experience negotiating deals around the country anticipated problems, but their red flags were ignored by those eager to please Bezos with a new playbook for a big win. Secretive and walled off from the rest of the company, according to people familiar with the situation, the HQ2 team members marinated in the headlines and hoopla and persuaded themselves Amazon would be welcomed anywhere.”

Instead of a sprawling, 6 million-square-foot complex and 25,000 jobs, Amazon will be renting 335,000 square feet in western Manhattan to house a smaller operation of roughly 1,500 employees, the Wall Street Journal reported in December 2019. When the agreement was announced, US Rep. Alexandria Ocasio-Cortez, a Democrat whose district lies within the city, gloated on Twitter: “Won’t you look at that: Amazon is coming to NYC anyway - *without* requiring the public to finance shady deals, helipad handouts for Jeff Bezos, & corporate giveaways.”