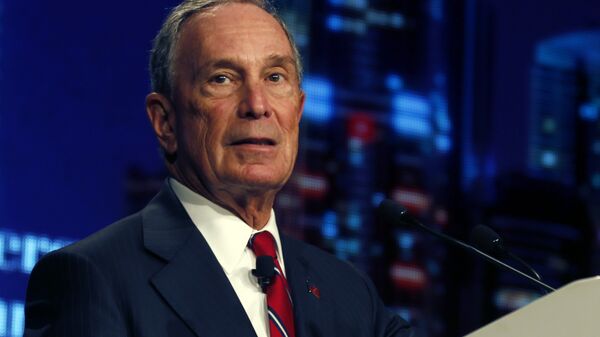 © AFP 2023 / STR
Subscribe
International
India
Africa
US President Donald Trump, who is known for coming up with peculiar nicknames for his potential 2020 presidential rivals, has recently reiterated his disregard for former Mayor of New York Michael Bloomberg by indicating how “little” he thought of him.

Michael Bloomberg, the former mayor of New York and current candidate in the Democratic party primaries, has hit back at Donald Trump, following the president’s recent insults made during a Super Bowl interview with Fox News.

“He is a pathological liar who lies about everything: his fake hair, his obesity, and his spray-on tan”, reads a statement from Bloomberg’s campaign spokesperson Julie Wood, as quoted by NBC News.

The remarks occurred following Donald Trump’s Sunday interview with Fox News, where he was asked about his thoughts regarding Democratic presidential candidate Michael Bloomberg, Trump's potential rival in the 2020 race.

He then went on to reflect on Bloomberg’s alleged need for special treatment during the Democratic primaries due to his moderate height, which is estimated to be around 1.7 meters.

“Now he wants a box for the debates to stand on. It's OK. There's nothing wrong. You can be short. Why should he get a box to stand on? He wants a box for the debates. Why should he be entitled? Does that mean everyone else gets a box?”, Trump said in the interview, jokingly concluding that he “would love” to run against Bloomberg if he gets nominated.

Trump’s comment came following his Sunday Twitter tirade, where he also claimed that Bloomberg, whom he brands as “Mini Mike”, unfairly uses “the right to stand on boxes” during his party’s on-stage debates. The president’s most critical remark, however, related to the owner of Bloomberg News' alleged participation in the media crusade against Donald Trump.

“Mini Mike is part of the Fake News. They are all working together. In fact, Bloomberg isn’t covering himself (too boring to do), or other Dems. Only Trump”, the president wrote on Twitter. “That sounds fair! It’s all the Fake News Media, and that’s why nobody believes in them any more.”

​“Looks like our ads are keeping you up at night. We've got one in particular you should watch today”, Bloomberg said in response to Trump’s Twitter rant.

When asked by reporters about his twitter clash with the president, the media mogul said: “the president lies, he lies about everything, so it shouldn’t be a surprise that he said things like that”.

“I stand twice as tall as he does on the stage that matters”, he added.

Donald Trump knows I can beat him — and the fear of that keeps him up tweeting about me late into the night. pic.twitter.com/p4ZA0PFLNL

Michael Bloomberg, who served as mayor of New York City from 2002 to 2013, had earlier switched from the Democratic to the Republican party to run for the post, but re-registered as a Democrat back in 2018. According to a recent poll by Morning Consult, Bloomberg currently holds fourth place among Democratic party presidential contenders, with 12-percent support from Democratic primary voters, but is planning to skip the Iowa caucuses this week.