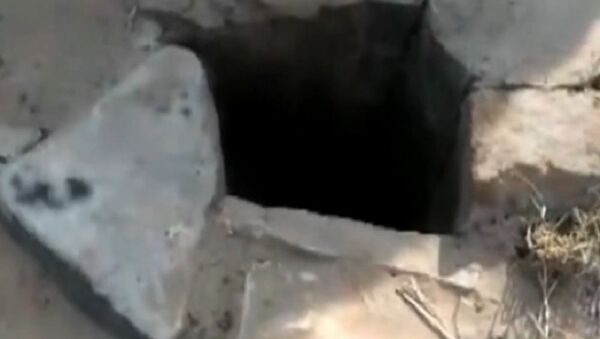 New Delhi (Sputnik): India is the biggest user of groundwater in the world and an estimated 27 million borewells were set up to draw water, in many cases illegally. Once the borewells dry up or are no longer used they are not covered up or sealed often leading to mishaps.

India’s Supreme Court on Monday asked both federal and provincial governments to file their responses on a petition filed in October 2019, following the death of a three-year-old boy in the southern state of Tamil Nadu after falling into a well. Though a rescue operation was carried out for almost 80 hours, the boy could not be saved.

The petitioner pointed out negligence on the part of governments to prevent such incidents. Some 92 percent of these kinds of incidents involve children under the age of 10.

According to the top court's guidelines, abandoned borewells require certificates from a relative department so that data can be maintained at the district level and it is mandatory to erect fencing around abandoned, under repair, or newly-constructed borewells.

According to data maintained by the federal National Disaster Response Force (NDRF), over 40 children have died after falling into borewells since 2009.

Lack of oxygen and the small size of the well hinder rescue operations, leading to their subsequent failure. Kids fall in these 50 to 250 feet deep borewells while playing.

Of the total reported cases, the highest numbers were from southern Tamil Nadu, western Gujarat, and northern Haryana.

Reports point out that illegal borewells are dug by a private water mafia in regions of water scarcity and they trade extracted water illegally. Once water groundwater levels go down, they abandon it without sealing it.

According to Delhi’s water supply department, the Delhi Jal Board, there were 19,154 illegal borewells in the national capital alone, out of which, only 2,630 have been sealed.

When Issue Came to Light

The issue of children falling into abandoned borewells garnered the national spotlight when a 5-year-old boy fell into a 50ft (15m) borewell in the northern state of Haryana in 2006 and was rescued by a specialised force after a 49-hour rescue operation, which millions of Indians watched on TV.