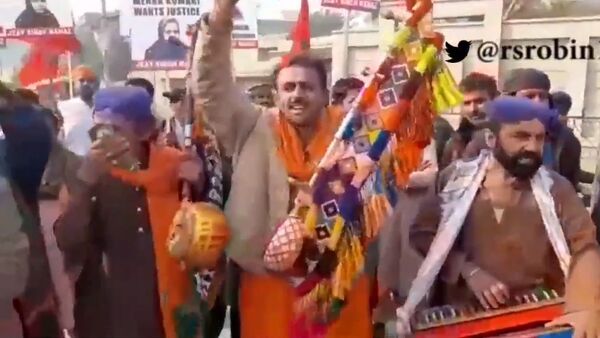 New Delhi (Sputnik): The Pakistani Hindu girl Mehak Kumari, now named Aleeza Raza, was allegedly abducted and converted to Islam. She married 28-year-old Ali Raza, a divorcee and father of four. The teenager was moved to a shelter home by the court after her first hearing in the case.

Outraged by the delay in the judgement related to a case of the kidnapping and alleged forced marriage of a Hindu girl along with numerous other incidents of abductions and forcible religious conversions, a number of Hindus staged a protest in Pakistan’s Sindh province with songs and musical instruments.

The protest came as the second hearing in the case of the alleged forced conversion of 15-year-old Mehak Kumari, a Pakistani Hindu girl, was deferred after the judge cancelled it, saying he was unwell.

In the video, the protesters can be seen marching with placards reading "Sindh condemn religious extremism" along with a picture of Kumari, clad in a burka, while singing traditional folksongs.

Roads in the province’s Jacobabad city had to be sealed with barbed wire by security personnel after the situation turned tense. A statement by Kumari was to be recorded in the hearing.

Despite prohibitory orders being in place, the Hindu community in Pakistani took to the streets to protest and demand protection of minorities in Pakistan.

“A protest march was called by Hindu residing in Jacobabad in front of the court. The rangers have sealed the city at various places”, senior journalist Ravinder Singh Robin stated.

Robin added that the government of Pakistan is trying to linger on the case. He suspected that they are neither willing to return the girl to her parents nor wanting her to go back to her Muslim husband Ali Raza, as it would spark outrage.

“Same is to be happened [sic] with Mehak Kumari as what happened with a Sikh girl Jagjit Kaur who was recently sent to Dar-ul-Aman in Larkana, a women shelter home. I am expecting that they will linger on the case and she would be brainwashed there by other Muslim women”, Robin added.

In the 21 January hearing, Mehak Kumari recorded a statement in court in which she said that she had wilfully accepted Islam and consented to marry Ali Raza.

The court ordered for her to be sent to Larkana Shelter Home, directing authorities to get Mehak’s ossification test done to confirm her age after her parents claimed she was a minor and therefore, her statement should not be taken into account.

After being missing for five days, Mehak Kumari was discovered by police in the town of Ghariyasin, near Jacobabad city.

The case outraged members of both the Hindu and Muslim communities when the news of her being missing became public in August 2019.

In a similar incident, a teenage Sikh girl, Jagjit Kaur, was sent to a shelter home after she was allegedly abducted, forced to convert to Islam, and marry a Muslim man.

According to Pakistani government statistics, minorities make up around 3.72 per cent of the country's population. A 2010 survey by an NGO called the Sikh Resource and Study Centre revealed, there are an estimated 50,000 Sikhs in Pakistan.