WHO Philippines Confirms First Death From Wuhan Coronavirus Outside China 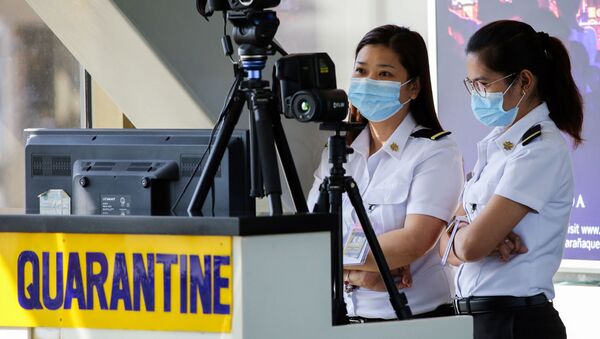 Chinese media earlier claimed that the so-called Wuhan coronavirus, as of Saturday, has killed 304 people and infected over 14,000 on mainland China. While the Chinese death toll continues to increase, the first fatal case outside of the country was reported on Sunday.

The Philippines health watchdog said early on Sunday that a 44-year-old man, a Wuhan resident, died on 1 February after contracting the new Wuhan coronavirus pneumonia-type infection, also known as 2019-nCoV.

According to the nation's Department of Health, there were now two confirmed cases of infection in the Philippines, including the deceased Chinese national.

​The new strain of coronavirus was reportedly first detected in the Chinese city of Wuhan, located in the Hubei province, in December 2019 and has since spread to more than 20 countries.

The outbreak prompted the World Health Organization (WHO) to declare a public health emergency of international concern earlier this week so as to ensure all nations take necessary preparatory measures.

Coronavirus: Pakistani Student Seeking Gov’t Help in Wuhan Posts Video of Indian Student Evacuation
The ground zero of new coronavirus is claimed to have been a seafood market in China’s Wuhan and has since spread to at least 20 countries. Global authorities have suspended air traffic to and from China, increased border and airport controls and put travelers with even slight traces of flu symptoms into isolated wards under strict quarantine.

The WHO has declared the Wuhan coronavirus a public health emergency of international concern.