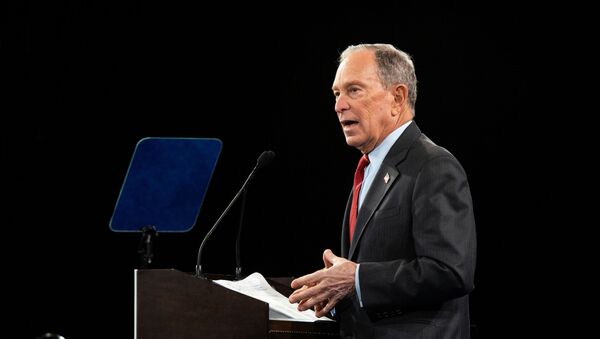 © REUTERS / EDUARDO MUNOZ
Subscribe
Lilia Dergacheva
All materialsWrite to the author
As the primary season is now kicking off, the DNC is reportedly eyeing ways to downplay the potential results of top-running Democratic candidates at the party convention, amid a broad advert campaign financed from one of the candidate’s, media mogul Mike Bloomerg’s, pocket.

POTUS Trump has drawn attention to “Mini Mike Bloomberg-paid ads” doing nothing else but increasingly pitting the DNC and general public against Bernie Sanders:

“He is going nowhere, just wasting his money, but he is getting the DNC to rig the election against Crazy Bernie, something they wouldn’t do for @CoryBooker and others. They are doing it to Bernie again, 2016", President Trump tweeted with a reference to the massive ongoing ad campaign, set up late last year by billionaire Democratic candidate Mike Bloomberg.

“Little Mikey Bloomberg wrote a big check to the DNC and whaddya know...they put him on the next debate stage", one wrote in the comments to POTUS’s post, elaborating on it and proceeding:

“If there's one thing voters love, it's a guy who gets to cut in line because he flashed a wad of cash at the right people. Right @BernieSanders?"

“Shows Demos are bought", another weighed in, while many couldn’t resist the temptation to laugh off Trump’s “soft spot” for “little Mikey":

"He should be OK sir, if they pay him off again!!!”, one posted tauntingly, with a second coming up with ROFL emojis and commenting on “one thing” Bloomberg has definitely achieved:

Even if @MikeBloomberg doesn't win the 2020 election, he sure as hell accomplished one thing for sure...

“Because Crazy Bernie is a push over who does anything for a buck", one user wrote explaining what he sees as a would-be scenario:

Because Crazy Bernie is a push over who does anything for a buck, they will pay him off again and he knows he has no chance anyhow. More NOTHING happening!

“Imagine someone far beyond crazy calling someone crazy. But here we are", a third took a dig at POTUS, with another netizen dwelling on Trump’s and Bloomberg’s fortunes:

"Mini Mike"
He's only "mini" until he stands on his wallet then he TOWERS over you!
Oh, and he's NEVER been BANKRUPT!😅 pic.twitter.com/tP7GW0OE2v

The assumption about the DNC’s stance and balance of power in the party ranks couldn’t go unnoticed either:

“The DNC is rigging the 2020 primary 'before our very eyes'. The Bernie Sanders people are going NUTS!!” A Twitterian wrote with the hashtag “#DemocratCivilWar".

“When I feel the Bern I seek medical attention", another replied in the thread, with someone else cheekily remarking there is “no need for a civil war”, as judging by how things develop, Bernie Sanders will “settle” before “going away with millions to his bank accounts".

Another, in the meantime, summed up preferences for Trump:

This is why the people love Trump. He’s defending his populist opponents on the other side over the handpicked candidates of the Democrat elite establishment.

It is incidentally not the first time Trump has warned about what he sees as the DNC's concerted efforts to "rig against" Sanders. Trump, who is apparently closely following the Dem battle for the party's nomination, declared last week that Sen. Bernie Sanders had taken the lead in the race, ascertaining though that he doubted the Democratic Party would ever “allow” the Vermont senator to win.

The other day, Politico reported that a small group of Democratic National Committee members had privately begun calling for support for a plan to potentially weaken Bernie Sanders’ 2020 campaign and kick off a brokered convention. What appears to be a policy reversal, profiting the Democratic Party’s left, will reportedly ensure that so-called superdelegates - DNC members, members of Congress and other top party officials - can cast their votes on the first ballot at the party’s national convention, to dilute the results of Democratic frontrunners. Talks about a potential rules change reportedly picked up as the Vermont senator boosted his ranking in the primary, with inter-party polls due to kick off in Iowa and a number of other states on Monday.

Separately, the Democratic National Committee unveiled a set of updated debate qualification rules on Friday that will arguably benefit Mike Bloomberg, allowing the former New York City mayor to take part in the 19 February presidential primary debate in Nevada, as the rules stipulate the doubling of the polling threshold and elimination of the individual donor requirement.