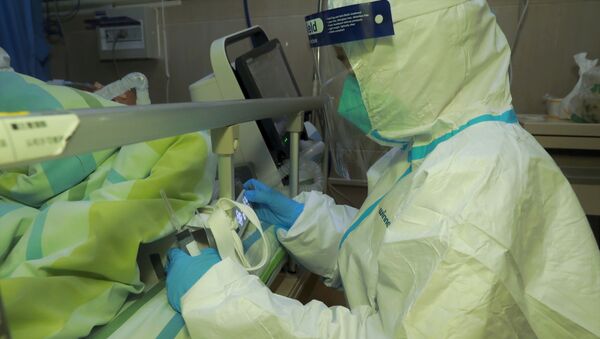 New Delhi (Sputnik): India evacuated its 324 nationals from the coronavirus-hit city of Wuhan in China’s Hubei Province on Saturday, with the national carrier Air India now being prepared for its second trip to bring back citizens stuck in the infected region.

A Pakistani student from Wuhan University in China has shared a video on social media to highlight how Indian students were being evacuated from the city, where the novel coronavirus emerged, while Islamabad has so far not taken measures to bring back its nationals from there.

Really sad. A Pakistani student in #Wuhan watching his Indian counterparts being evacuated. The students have been left to their fate by #Pakistan government. #coronarovirus pic.twitter.com/OT3kmDyT7I

​“These people are Indian students and this bus has come from embassy to take them. This is at a university in Wuhan where there are Indian students. They will be taken to airport from here. Bangladeshi students will also be taken away tonight. And then there is us, the Pakistanis about whom the government doesn't care whether we die or stay alive or get infected. They say we will not evacuate you or facilitate you. Shame on you Pakistan government! Learn something from India and how they take care of their people”, the student can be heard saying in the video.

Meanwhile, Special Assistant to the Pakistani Prime Minister on Health Dr Zafar Mirza announced that no Pakistani would be allowed to travel back to the country from China until they complete a 14-day observation period.

“Those declared free of the virus after the period will be issued with a certificate that assures the airport officials that they are free from the disease”, Mirza was quoted as saying by Pakistan’s Geo News TV website.

On 1 February, an Air India Boeing 747 with 324 Indians on board landed at Delhi’s Indira Gandhi International Airport. The government is now planning to send the national carrier on another trip to the virus-ridden city.

Coronavirus: India to Send Another Aircraft to Wuhan to Evacuate Its Citizens
The decision came days after a Wuhan University student from the southern Indian state of Kerala was identified as having the first confirmed case of coronavirus in the South Asian country.

On Thursday, the World Health Organisation (WHO) declared a global health emergency over the outbreak of the coronavirus, which is believed to have originated at a wild animal market in Wuhan and was first detected in December 2019.

As of now, the death toll has reached 254 people, while the number of those infected has surged to about 12,000. Over 100 cases are said to have been registered outside China as well, including in Vietnam, Singapore, the US, the UK, Russia, France, Germany, and several countries.