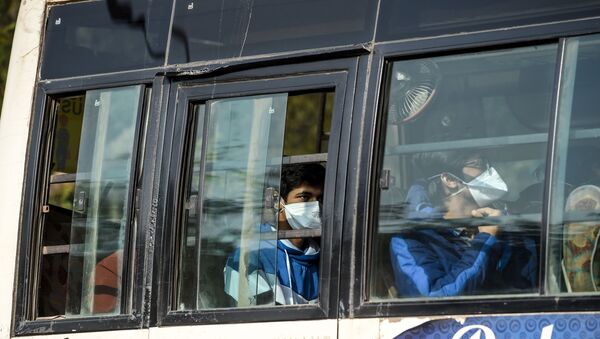 New Delhi (Sputnik): On Saturday morning, an Air India Boeing 747 with over 300 Indians evacuated from the Chinese city of Wuhan, hotbed of the novel coronavirus, landed at Delhi’s Indira Gandhi International Airport.

In a bid to evacuate Indians from the source of the coronavirus, China, national carrier Air India is prepped for its second trip to the city of Wuhan, Hubei Province. An Air India Boeing earlier brought 324 Indians back to New Delhi from the virus-ridden region.

Air India special flight with 324 Indians from Wuhan is on the way to parking bay 82( remote bay) at Delhi Airport #proudAirIndian pic.twitter.com/spjY5LxV6l

​“Another flight will depart to Wuhan from Delhi at 12:50 p.m. (Indian Standard Time) today with a different set of crew, same doctors' team with another aircraft. The rescue team is again headed by Captain Amitabh Singh, Director Operation, Air India", an Air India spokesperson confirmed on Saturday.

The news is now being circulated on social networking platforms.

Another flight will depart to Wuhan from Delhi at 12.50 pm today with different set of crew, same doctors team with other aircraft. The rescue team is again head by Capt Amitabh Singh, Director Operation, Air India #ProudAirIndian

​As precautions against the spread of the coronavirus, Indira Gandhi International Airport is hosting a designated screening camp to check Indian passengers from China.

​Out of the 324 Indians who arrived from China on Saturday morning, 95 suspected cases have been put under observation in a New Delhi hospital.

The coronavirus is believed to have surfaced at a live wild animal market in Wuhan, the capital city of China's Hubei Province in December 2019.

The infection has affected over 11,000 individuals and already killed 259 people.

A student from the southern Indian state of Kerala has been identified as having the first confirmed case of coronavirus in India. While the patient has been kept in an isolation ward under observation, the number of suspected cases in Kerala has risen to 1,053.