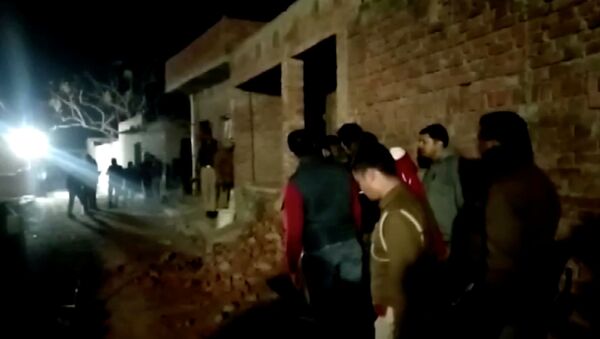 New Delhi (Sputnik): India’s state of Uttar Pradesh was tense on Thursday 30 January, after a man took 23 children hostage. The accused invited the children to his home, supposedly for a birthday party for his daughter. The state government launched a Commando operation, which ended with the man being shot dead and the children being rescued.

Angry locals beat the wife of Subhash Batham, a resident of the Farrukhabad district of Uttar Pradesh, who had been holding several women and 23 children, and killed her, the police chief of Kanpur region in Uttar Pradesh confirmed on Friday.

Inspector-General of the Police in Kanpur Range in Uttar Pradesh said that the woman had succumbed to her injuries and the police were waiting for the post mortem report.

#UPDATE IG Kanpur Range Mohit Agarwal: The woman has succumbed to injuries, we are waiting for post mortem report, further details on cause of death will only come out after the report. #Farrukhabad https://t.co/Qd85Hg7AtM

​News agency ANI had earlier reported that the woman was beaten by locals and admitted to hospital.

Farrukhabad: Wife of the man who held hostage 15 children yesterday and was later killed by Police, beaten up by locals. She has been admitted to hospital in critical condition.More details awaited. pic.twitter.com/zWRPI6OmEF

​As of now, it remains unclear if the woman was also an active coconspirator in Batham's plan, or if she just fell prey to the wrong-doings of her late husband.

Commandoes had first tried to convince the man to release the children, but he did not relent, forcing them to engage in an operation to free the hostages. After over ten hours the commandoes shot him dead and released all of the children unharmed.

The police suspect that Batham was not in a healthy state of mind. Batham, who had been a suspect in a murder case previously, shouted to police before the encounter,  that he did not commit any crime.

The man, who did not disclose his demands while kidnapping the children, had allegedly come to his house to celebrate the birthday of his daughter. He had then approached the local district magistrate, attempting to highlight the absence of sanitation facilities at his residence.

Calling himself a mere labour, Batham had also complained to the district magistrate about how he was denied housing provisions ensured by the government to help poor people.

Media reports suggest Batham's extreme approach to resolving his housing situation could have been the motive for the kidnapping and his demands that his various complaints be heard.