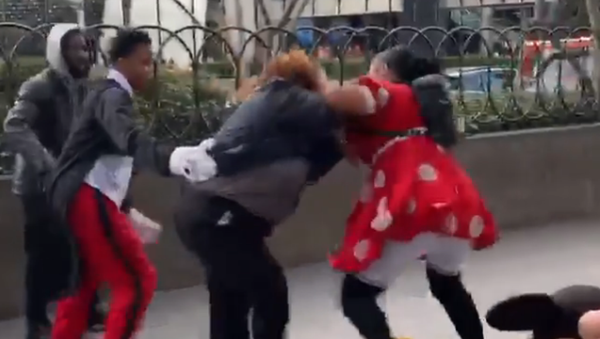 © Photo : Instagram / @pretty_prinnn
Subscribe
International
India
Africa
A spokesperson for Las Vegas Police said that they were “aware of the event”, but a victim had not step forward and filed a complaint. However, the police said they are “looking into the matter and trying to identify the suspect,” according to the New York Post.

A woman dressed in a Minnie Mouse costume was filmed on the Las Vegas strip fighting with a female security guard in front of tourists, while two other people dressed as Mickey and Goofy were trying to pry her off.

The video of the fight, which was initially shared online on Monday by Facebook user Princess BRodriguez and later went viral, shows the red-headed security woman attacking Minnie, who is accompanied by Mickey and Goofy.

Minnie soon turned the scales and gained the upper hand. She hit the guard several times in face before pulling her hair, yanking her to the ground, and raining blows upon her, as her friends attempted to stop her.

When Mickey and Goofy finally managed to pull Minnie of the woman, she took off her large costume shoes and shouted “I ain’t no bitch, Bitch!” before going away.