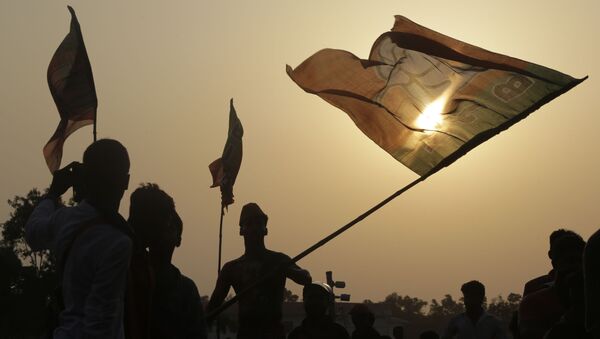 Kejriwal said Modi is his prime minister too, and "the biggest sponsors of terrorism" should not interfere in the internal matters of India.

"Narendra Modi Ji is the Prime Minister of India. I also have a Prime Minister. The election of Delhi is an internal issue of India and we do not tolerate the intervention of the biggest sponsors of terrorism. As much as Pakistan tries, it cannot attack the unity of this country", he tweeted.

​Chaudhry tweeted on Thursday that the Indian people "must defeat Modi madness", while addressing the upcoming Delhi elections, set for 8 February.

People of India must defeat #Modimadness ,Under pressure to lose another State Elections(Delhi on Feb 8th),he resorts to ridiculous claims and threats endangering Region,Mr Modi has lost balance after internal and external reaction to Kashmir,Citizenship laws and failing economy https://t.co/bBIyOvf5Ee

Nearly 14.6 million eligible voters will exercise their right to vote during a single-phase election in Delhi. The results will be announced on 11 February. In 2015, Kejriwal’s Aam Aadmi Party won 67 of the 70-legislative assembly seats and the other three were secured by the BJP.

Both Modi and Kejriwal have been at odds on various issues and have mounted sharp attacks on each other previously while campaigning for the Delhi elections.

While the AAP is currently riding its campaign on the feats that it claims to have achieved in the areas of education, sanitation and healthcare, the BJP has called all of its claims “false”.

Pakistan has been at loggerheads with India since last August after the Prime Minister Narendra Modi-led government scrapped the quasi-autonomous status of the India-administered Kashmir. Since then, Islamabad has raised the issue on numerous international platforms.