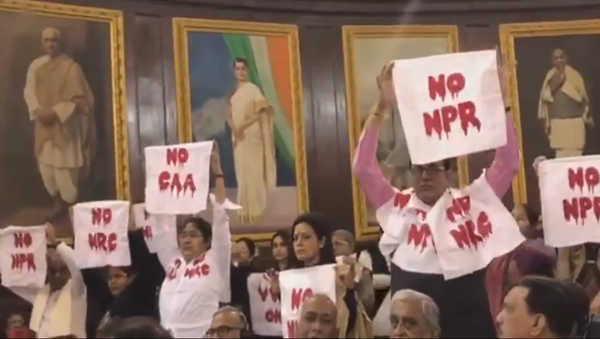 New Delhi (Sputnik): Protests across India are continuing against the Citizenship Amendment Act (CAA) and the National Population of Register (NPR), with both widely perceived as discriminatory against Muslims.

TMC, the ruling party in West Bengal is set to boycott the first two days of the budget session to mark its protest against the “biased” laws and policies of the Modi government.

The West Bengal government has been a vocal critic of the CAA and the NPR, and the West Bengal State Chief Mamata Banerjee party-led government recently passed an anti-CAA resolution and appealed to Prime Minister Narendra Modi to review the CAA.

Parliamentarians led by the chief of India’s principal opposition party Congress also staged demonstration in front of Mahatma Gandhi’s Statue in front of the Parliament building.

​While the citizenship law seeks to grant Indian citizenship to non-Muslim minorities who fled persecution from Afghanistan, Bangladesh and Pakistan and settled in India on or before 31 December 2014, the government says the NRC is intended to identify genuine citizens.

The NPR aims to record biometric and demographic details of Indian nationals.

Prime Minister Modi has maintained that no Indian Muslim has anything to worry about as regards the CAA “as it seeks to grant citizenship, not snatch it”.